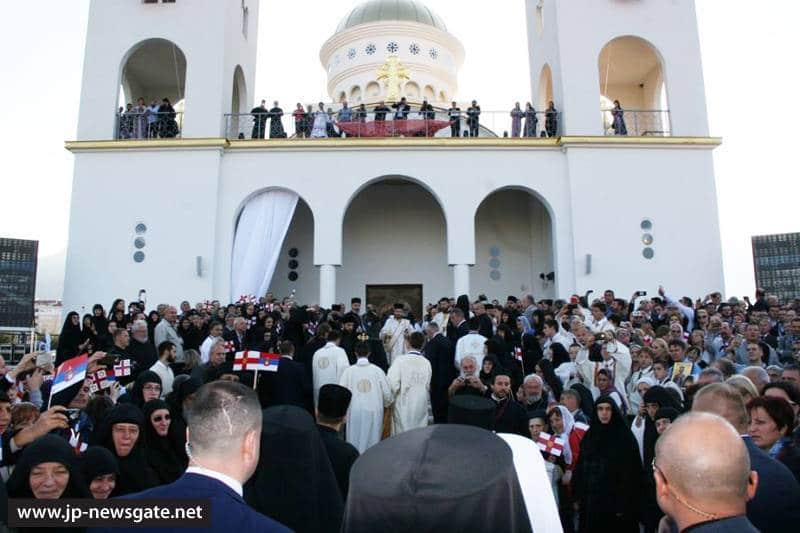 On Sunday, the 12th/25th of September 2016, the church dedicated to St John Vladimir, who suffered a martyr’s death in 1017, was officially inaugurated. The ceremony coincided with the 1000th anniversary of the death of St John. The church was constructed upon the inspiration, supervision and care of Metropolitan Amfilohije Radovic of Montenegro.

The Church stands magnificently in the centre of Bar as a testimony to Orthodoxy which has survived in Montenegro in spite of past and present adversities. On the inside, the decoration of the church as well as the building materials are indeed remarkable, as the praying faithful exclaim “akin to a brightly-lit sky, the Church illuminates all the pious as we cry to the Lord, make this house solid”.

In attendance at the ceremony were representatives of all Orthodox Churches. The Churches of Jerusalem, Serbia and Albania participated with their Heads, Patriarch Theophilos, Patriarch Irinej and Archbishop Anastasios.

The divine Liturgy was led by Patriarch Theophilos of Jerusalem, having as concelebrants Patriarch Irinej and Archbishop Anastasios, as well as representatives of other Churches. Representatives of the State of Montenegro and of other Christian doctrines also attended the ceremony, together with a crowd of faithful. A Byzantine and European choir accompanied the sacrament of the Holy Eucharist, after the Lord’s Last Supper, Crucifixion and Resurrection for our salvation and for the glory of the Triadic God.

The panegyric speech was delivered by Patriarch Theophilos of Jerusalem.

The martyr St John Vladimir, said His Beatitude, “has led us all here in this Pan-Orthodox Gathering in order to celebrate the 1000th anniversary of his martyrdom for the love of Christ. Let us now all confess “the testimony God has given about his Son. And this is the testimony: God has given us eternal life, and this life is in his Son. Whoever has the Son has life; whoever does not have the Son of God does not have life” (1 John 5, 10-15).

It is this precise testimony “whoever has the Son has life” that was preached by John the Forerunner in the spiritual deserts of Montenegro, Dyrrachium and Albania during his earthly life, but also during his transition to the eternal residence in heaven, as taught by Paul: “For we know that if the earthly tent we live in is destroyed, we have a building from God, an eternal house in heaven, not”. (2 Corinthians 5, 1).

“The holy martyric and royal/hegemonic personality of the holy martyr Jon Vladimir stands out today, 1000 years after his death, as a living example to be emulated”, added Patriarch Theophilos.

After His address, the Patriarch offered an icon of Theotokos Jerusalemite to H.B. Patriarch Irinej of Serbia and the Most Reverend Metropolitan Amfilohije of Montenegro.

On the conclusion of mass, Patriarchs, Prelates and Priests exited the Church amidst joyful cheers by the crowd of the faithful.

Lunch, hosted by Metropolitan Amfilohije, was served in an open-air space.

On the conclusion of this both tangible and spiritual banquet, His Beatitude and Entourage, accompanied by the Assistant Bishop of the Metropolitan of Montenegro, the Most Reverend Bishop Ioannikios, left for Tivat, Montenegro, by car.

After meal, the Patriarch left for Belgrade Airport. From there, boarding a Serbian Airlines flight, He flew to Tel Aviv on Monday. From the airport, He arrived in Jerusalem by car, in order to participate in the feast of the Elevation of the Holy Cross.