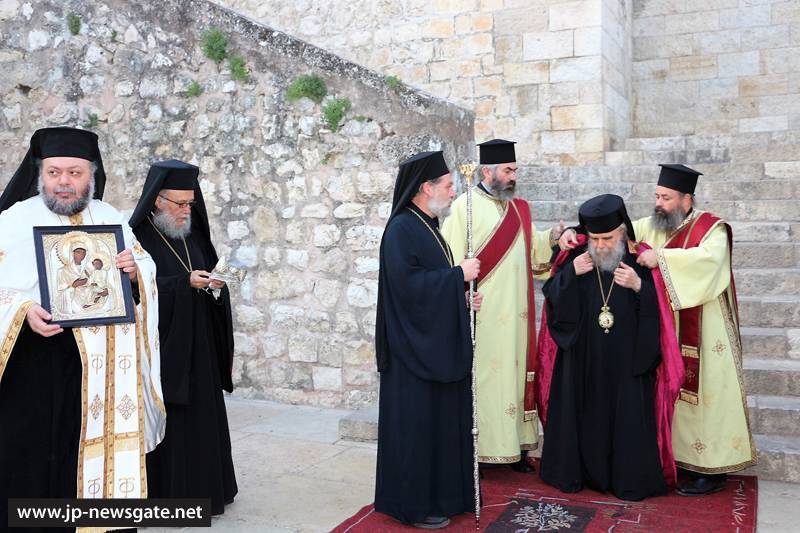 THE NATIVITY OF THE MOST HOLY THEOTOKOS CELEBRATED AT THE PATRIARCHATE

On Wednesday the 8th/21st of September 2016, the feast of the Nativity of Our Most Holy Lady the Theotokos was observed by the Patriarchate in commemoration of the fact that God had offered Mary as a gift to her barren parents, Joachim and Anna, for their fervent faith and prayer; but also as a gift to humanity as a whole, for she was destined to bear the Son of God, the Redeemer and Saviour of the world.

The feast was observed:

A. In the Patriarchate

At the Monastic Church of Sts Constantine and Helen, His Beatitude Theophilos and Hagiotaphite Fathers being in attendance.

At the Church dedicated to the Nativity of Theotokos, by means of a panegyric divine Liturgy, led by Patriarchal Commissioner, Metropolitan Isychios of Kapitolias. Co-officiating were the hegumen, Archimandrite Narcissus, and priests Georgios, Pavlos and Joseph. The Beit-Jala Choir sang for several Orthodox faithful from the town.

On the conclusion of the service, the hegumen and the town’s Community hosted Primates to a reception at an events hall adjacent to the Church.

C. At the Tomb of the Mother of God in Gethsemane

The divine Liturgy was led by Archbishop Aristarchos of Constantina, having as concelebrants Archimandrites Meletios, Parthenios and Porphyrios as head priest. Archimandrite Aristovoulos sang for a congregation of monks, nuns and pilgrims. After the service, the hegumen, Archbishop Dorotheos of Avila, hosted Primates to a reception at the hegumeneion.