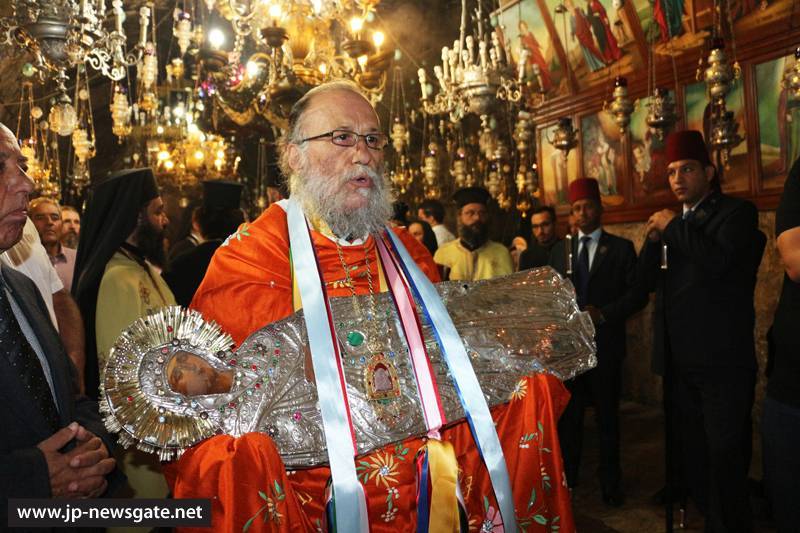 RETURN OF THE ICON OF THEOTOKOS TO THE DEPENDENCY IN GETHSEMANE

On the morning of Monday, the 23rd of August/5th of September 2016, day of the Apodosis [Leavetaking] of the Dormition of Theotokos, the icon of the Dormition was ritually returned from the Tomb of the Mother of God in Gethsemane – wherein it was kept since the 12th/25th of August 2016 – to the Dependency of Gethsemane opposite the Church of the Resurrection.

The ceremony began with a procession, after the Divine Liturgy, through the Via Dolorosa to the Old City of Jerusalem.

The procession was headed by the hegumen in Gethsemane, Archbishop Dorotheos of Avila, who carried the holy icon against his bosom – with Hieromonks, Archimandrite Bartholomew, monks, nuns and pilgrims following.

On the way, supplications were made at the Monasteries of Joachim and Anna, Praetorium, St Charalambos and Seida Naya. The procession was flanked by faithful and locals, having adorned their houses with flags, flowers and icons.

At the intersection between Christian and Patriarchate streets, Patriarch Theophilos of Jerusalem venerated the icon, accompanied by Hagiotaphite Fathers, Jerusalemites and pilgrims.

From there, the procession continued to the court of the Church of the Resurrection, where Archbishop Isidoros of Hierapolis, Elder Sacristan, was waiting to venerate. After a supplication, the icon was carried to the Dependency, where it shall be kept until the following year.