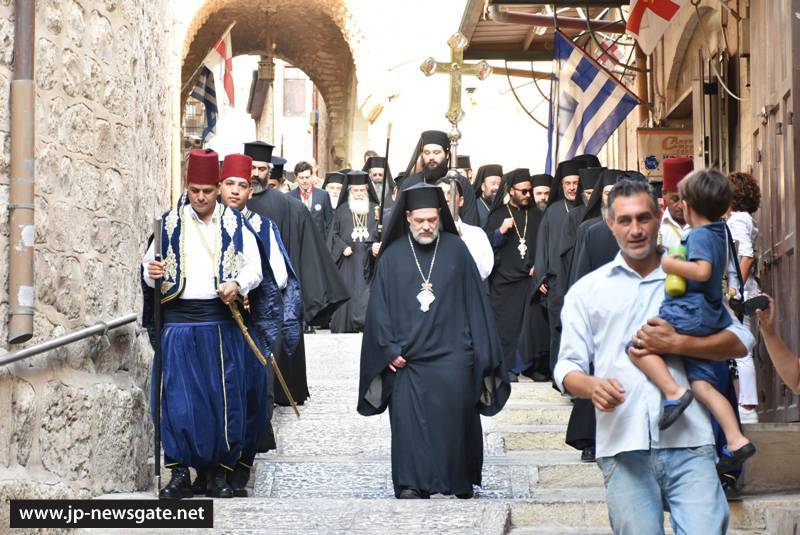 ENKOMIA IN HONOUR OF THEOTOKOS AT THE PATRIARCHATE (2016)

On Saturday, the 14th/27th of August 2016, the Enkomia [Praises] ceremony in honour of Theotokos was held at the Church of the Dormition of Theotokos in Gethsemane, wherein stands the Tomb of the Mother of God.

A procession headed by Patriarch Theophilos of Jerusalem and followed by Primates and Priests left the Patriarchate for Gethsemane through the Via Dolorosa. Along the way, the procession was welcomed by the hegumens at the Monasteries of the Praetorium, Sts Joachim and Anna, and St Stephen the Protomartyr. Pilgrims participated in the procession, singing the troparia in Greek, Russian and Romanian.

In Gethsemane, the Entourage rested shortly, as priests put on their vestments for the welcoming ceremony.

Then, from the Forecourt of the Church of Gethsemane, the Patriarch walked to the Tomb of the Mother of God, where he put on a mantle and gave blessings before the Epitaph was moved to the centre of the church, the icon of the Dormition of Theotokos placed upon it. The Epitaph-Enkomia service then began in the presence of the Greek Consul-General to Jerusalem, Mr Christos Sofianopoulos, the Ambassador of Greece to Jordan, Ms Louisa Marinakis, and Mr Terrence Quick, Deputy Minister to the Prime Minister of Greece, representing the Greek state.

The Troparia praise and glorify the All-holy Theotokos as the one chosen by God to incarnate His Son through the Holy Spirit, and the one who followed Jesus to the Cross and attested His Resurrection. Theotokos was buried in Gethsemane before ascending to the right of the Father wherefrom she mediates in woes and sorrows.

An analytical description of the above was included in the sermon delivered by Metropolitan Theologos of Serres, Greece.

The sermon was followed by the chanting of Blessings, Praises and Doxology, attended by a crowd of faithful. Priests then carried the Epitaph before the Gate of the Church where, on the inside, a supplication was made. The icon and Epitaph were then placed before the Platytera, where the faithful proceeded to venerate.

On the conclusion of the service, the Patriarchal Entourage walked to the hegumeneion where Archbishop Dorotheos of Avila hosted guests to a reception.