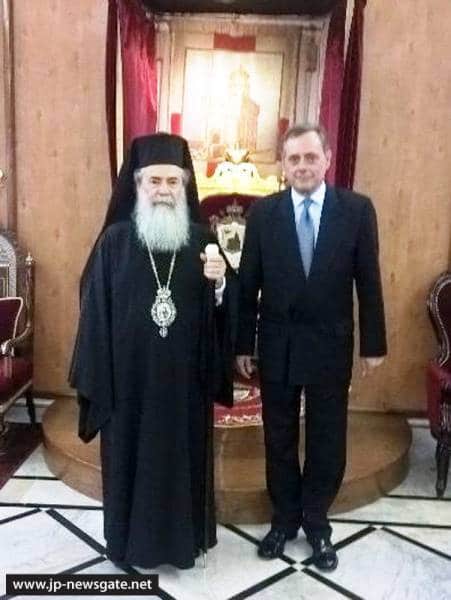 THE NEW AMBASSADOR OF GREECE TO ISRAEL VISITS THE PATRIARCHATE

On Tuesday, the 10th/23rd of August 2016, the new Ambassador of Greece to Israel, Mr Constantinos Bikas, visited the Patriarchate on the occasion of assuming his new duties.

The Ambassador was welcomed by H.B. Theophilos, Patriarch of Jerusalem, in the presence of Hagiotaphite Fathers.

In the context of this inaugural visit, Mr Bikas expressed joy over starting his tenure from the Patriarchate, which he appreciates and respects as a very ancient Christian institution in the Holy Land that performs remarkable religious, cultural and pacifying work.

In His reply, the Patriarch informed the Ambassador on the present-day political situation in Jerusalem and the Holy Land, with a political solution being as yet unattainable; He also referred to the Patriarchate’s struggle, by means of religious weapons, to calm tempers and create a climate of political dialogue, aimed at a viable solution that, if possible, would satisfy the rights and demands of both political sides.

Finally, Ambassador Bikas thanked His Beatitude for bringing him up-to-date and expressed a strong desire to collaborate with the Patriarchate. Patriarch Theophilos wished the Ambassador a fruitful tenure to the benefit of the Church and the Greek nation.