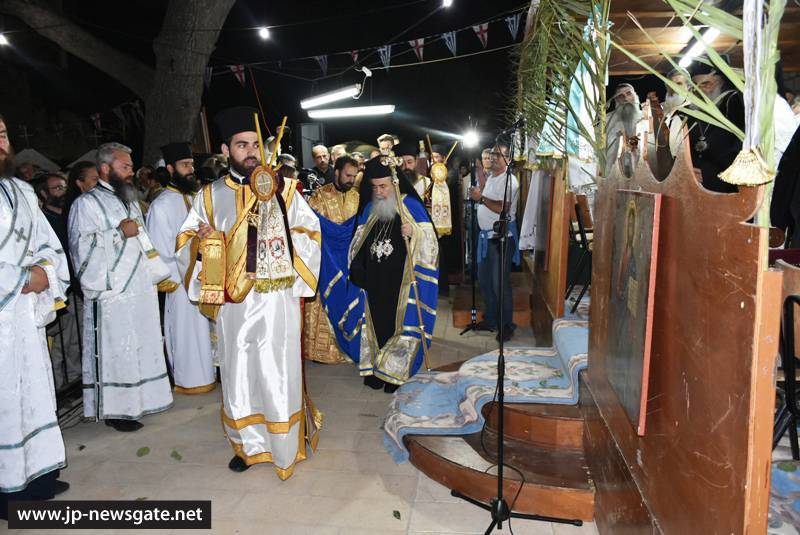 THE TRANSFIGURATION OF THE SAVIOUR AT THE PATRIARCHATE (2016)

On Friday the 6th/19th of August 2015, the Patriarchate celebrated the Transfiguration of the Saviour in commemoration of the event recounted by the Evangelists (Matthew 17, 1-8), namely that the Lord took with him Peter, James and John and led them up Mount Tabor where He was transfigured, His face shone like the sun, and a bright cloud covered the disciples and Moses and Elijah appeared before them and talked with Jesus, and the voice of the Father was heard saying from the cloud: “This is my Son whom I love; with Him I am well pleased. Listen to Him!” and Peter said “Lord, we will put up three shelters, one for you, one for Moses and one for Elijah and we will stay here” – so that by this sight, namely the revelation of His divine nature, the Lord showed the beauty of man before the fall and his ability to reach divinity by grace.

The event was celebrated:

A. On Mount Tabor where a Vigil was observed on the night of the feast before Matins and the divine Liturgy, led by H.B. Theophilos, Patriarch of Jerusalem, having as concelebrants Metropolitans Isychios of Kapitolias, Panteleimon of the Bishopric of Veroia, Timotheos of Bostra, Archbishops Aristarchos of Constantina, Methodios of Tabor, Hagiotaphite Hieromonks i.e. Archimandrite Chrysostomos, hegumen in Kana, and Archimandrite Paisios, Rum Orthodox Arabic-speaking Presbyters and approximately 100 visiting priests from Russia, Greece, Romania and Ukraine, Archdeacon Evlogios and deacon Markos. The Very Reverend Georgios of the Bishopric of Ilia and the Patriarchal Commissioner in Accra Ptolemais, Archimandrite Philotheos, sang in Arabic for a pious congregation of pilgrims from Greece, Russia, Romania as well as locals from Northern Israel.

To the faithful His Beatitude delivered a sermon in Greek, pointing out the significance of the day as, through His Transfiguration, Christ deified human nature that had been stained by sin, as He became the ruler of the dead and the living through His Resurrection. “Christ” said the Patriarch “by means of His redeeming Passion and Resurrection introduced our own humanity into the kingdom of His divine and brilliant glory”. It is precisely this brilliant divine glory that the Lord communicated to His disciples, said Patriarch Theophilos, soon before His Crucifixion. “In other words, Christ demonstrated to His disciples that not only is He a perfect man but He is also a perfect God, of the same substance as the Father and the Holy Spirit”.

After the sermon, a crowd of faithful participated in Holy Communion for atonement, blessing and eternal life. Before the apolysis, the Patriarch recited the prayer of the fruit. On the conclusion of mass, hegumen Hilarion hosted the Patriarchal Entourage to a reception at the hegumeneion.

On feast-day, the divine Liturgy was led by Metropolitan Kyriakos of Nazareth, having as concelebrants Arabic-speaking Presbyters and Archimandrite Hieronymos, for a pious congregation of Arabic-speaking from Northern Israel.

At noon, Archimandrite Hilarion hosted guests to lunch with fish.

In Gethsemane, at the Tomb of the Mother of God, the Transfiguration of the Lord was celebrated with a divine Liturgy led by Archbishop Theophanes of Gerassa, having as concelebrants Hagiotaphite Hieromonks headed by Archimandrite Sergios, for a pious congregation of locals and Greek pilgrims, hosted by the hegumen, Archimandrite Nektarios.

At the Monastery of the Transfiguration in Ramallah, the feast was observed with a divine Liturgy led by Metropolitan Joachim of Zambia for a crowd of Rum Orthodox Arabic-speaking faithful from the city.

On the conclusion of mass, after the blessing of the fruit and the apolysis, Archimandrite Galaktion hosted the Primates to a reception followed by lunch at a town restaurant.