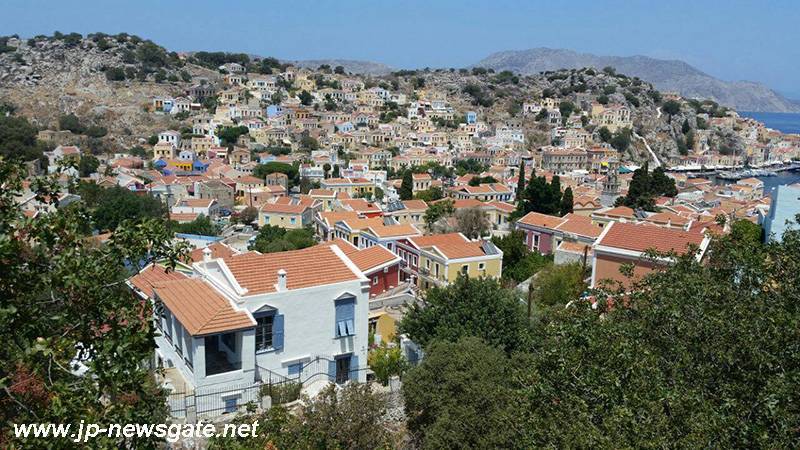 THIRD DAY OF THE PATRIARCH’S VISIT TO RHODES

On Wednesday, the 14th/27th of July 2016, H.B. Theophilos, Patriarch of Jerusalem, accompanied by the Elder Secretary-General, Archbishop Aristarchos of Constantina, Hierodeacon Markos, Professor A. Moropoulou of the NTUA, the former Ambassador of Greece to Jordan, and then to Lithuania, M. H. Asteriades, visited the island of Simi by ship.

There, the Patriarch visited the holy site of the Archangel-Panormites, where He was warmly welcomed by the clerics of the Bishopric of Simi and a crowd of pilgrims praying for the Archangel’s help and protection. After venerating, His Beatitude and Entourage prayed to the Archangel for the success of restoration works on the Holy Aedicula, now underway.

They then admired the wall-painting in 17th c. Cretan style and the tokens of gratitude brought by those helped by the Archangel. They went on to visit the Ecclesiastical Museum, rich in ecclesiastical exhibits.

Around noon, the Patriarch visited the “Aigialos” beach, where he was courteously hosted to lunch by Professor Moropoulou, the Mayor and the hospitable inhabitants of Simi.

On the evening of the same day, His Beatitude sat at dinner hosted in His honour by the Rhodes Association of Hoteliers and their President, Mr Antonios Kambourakis.