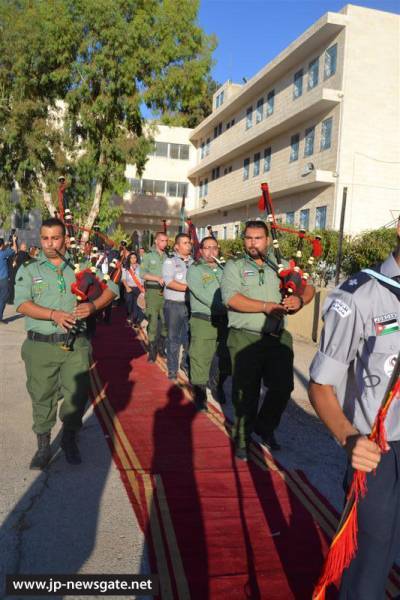 GRADUATION CEREMONY AT THE PATRIARCHATE’S SCHOOLS IN JORDAN

On the evening of Monday, 28 June/11 July 2016, the Patriarchate’s Schools in Jordan held their graduation ceremony.

The ceremony took place at the school’s outdoor area of events, in the city of Fhes, a suburb of the Jordan capital of Amman.

His Beatitude Theophilos, Patriarch of Jerusalem, honoured the event with His presence. He was accompanied by Archbishop Aristarchos of Constantina, the Chairman of the Committee on the Patriarchate’s Schools in Israel and Jordan, Archimandrite Ieronymos, the Patriarchate’s Arabic-speaking liaison, f. Issa Mousleh, presbyters from Fhes and representatives of the Jordan Government. Parents and relatives of the graduands also attended the ceremony.

A total of 135 graduands were awarded graduation titles. They came from the “Patriarch Diodoros” School in Amman, the Madeva School, the Fhes School and the Zarka School.

The well-organized ceremony commenced with the Jordan National Anthem and addresses by f. Smerat, the new Principal of the Schools, Ms Amira Sanaa, and representatives of the graduates in Arabic, English and French.

After a performance of traditional dances and songs, His Beatitude’s address was read in Arabic by f. Issa Mousleh. As a token of gratitude, teacher representatives conferred on the Patriarch an appreciation plaque. His Beatitude then awarded the graduation titles extending wishes for further academic and professional success.