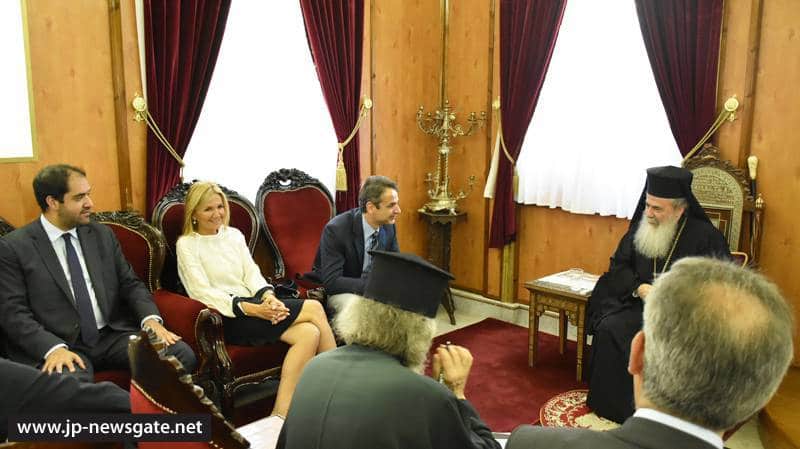 THE PRESIDENT OF NEW DEMOCRACY, MR KYRIAKOS MITSOTAKIS, AT THE PATRIARCHATE

On the morning of Saturday, the 26th of June/9th of July 2016, the President of New Democracy and Leader of the Opposition in Greece, whilst on a visit to the state of Israel and the Palestinian Autonomy, visited the Patriarchate.

Mr Mitsotakis was accompanied by his esteemed wife, associates of his, i.e. Mr Alexandris, former employee of the Greek Embassy to Israel, and the Greek Consul-General to Jerusalem, Mr Georgios Zacharoudiakis.

In the context of the visit, a discussion took place initially on the Great Synod of the Orthodox Church, recently convened at the Orthodox Academy of Crete in Chania, Mr Mitsotaki’s birthplace.

Similarly, the religious, cultural and peacemaking work of the Patriarchate was discussed at the meeting, especially in the context of the as yet unresolved problem between Israelis and Palestinians.

This unstable political situation has also produced consequences for the Holy Shrines, in which both political sides are willing to show strong interest, as recently demonstrated in the case of the restoration of the Aedicula of the Holy Sepulchre. Thoroughly informed of the restoration project by H.B. Theophilos, Mr Mitsotakis proposed to speak to economic operators willing to financially contribute to the continuation of the project.

Extending thanks, the Patriarch said that Mr Mitsotakis’ very visit is the strongest help and support of the Patriarchate’s work and of distressed Christians in the Holy Land and the Middle East, and that it also attests to the fact that Greece, as heir to the Byzantine Empire, remains the cradle of Rum Orthodoxy in spite of the country’s economic crisis. The Patriarch added that the fact that members of Rum Orthodoxy, namely pilgrims from the Orthodox countries of Greece, Romania, Russia, Bulgaria and other, visit the Holy Shrines, is indeed encouraging.

For the support provided by Mr Mitsotakis and his family to the Patriarchate, especially during the crisis that had plagued the Patriarchate a few years ago, His Beatitude bestowed on him the honorary distinction of the Great Cross of the Equestrian Order of the Holy Sepulchre.

On his part, Mr Mitsotakis offered the Patriarch the silver emblem of an olive branch as a token of peace and conciliation.

His Beatitude offered Mr Mitsotakis an icon of Panagia Jerusalemite, a cross to his wife and Jerusalemite eulogias to the members of his entourage.

After venerating at the shrines, Mr Mitsotakis, was received by the Elder Sacristan, His Eminence Isidoros, Archbishop of Hierapolis, and deacons, where he was offered an icon of the Lord’s Descent into Hades as a token of blessing.