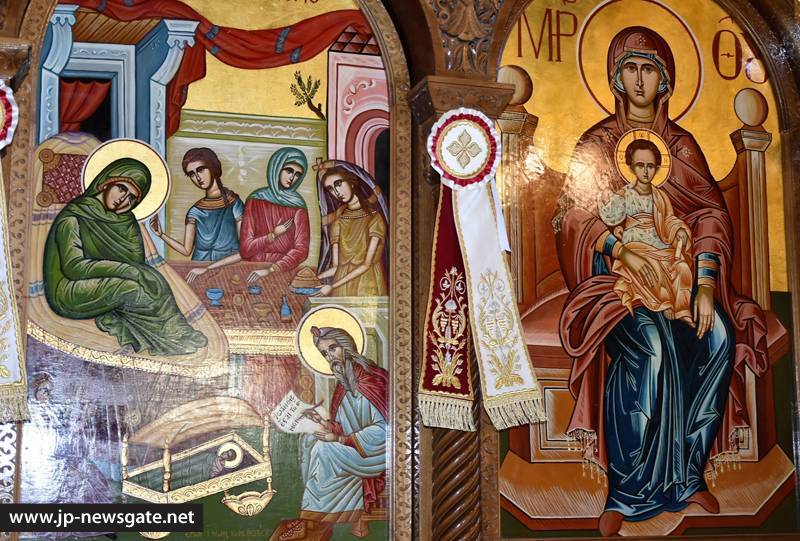 THE NATIVITY OF THE FORERUNNER CELEBRATED AT THE PATRIARCHATE 2016

On Thursday, the 24th of June/7th of July 2016, the Patriarchate celebrated the Nativity of St John the Baptist.

On this day, the Church commemorates the birth of John the Baptist to his barren mother Elisabeth, wife to the Prophet Zacharias, by divine power and revelation, as relayed in the Evangelical excerpt by the Evangelist Luke (1, 5-80).

John, born according to God’s promise, was the Forerunner of our Lord Jesus Christ, he who had prepared His way, the “greatest among those born of women” according to the undeniable words of the Lord, and decapitated by Herod, controlled by Herodias, his brother’s wife (Matthew 14, 1-12).

The feast was observed by the Patriarchate of Jerusalem in the birthplace of St John the Baptist, namely Oreini [Ein Karem], and specifically at the Monastery dedicated to his name. Vespers and the divine Liturgy were led by Archbishop Demetrios of Lydda, having as co-officiant Metropolitan Evgenios of Hierapytna and Sitia of the Church of Crete. Archbishop Makarios of Qatar sang with Nun Danielia in Greek and young members of the flock in Arabic. Archbishop Theophanes of Gerassa prayed with them for a pious congregation of Jerusalemites and pilgrims, nuns, and others.

After the divine Liturgy, the Monastery’s Supervisor, Monk Chariton, hosted the Primates and congregation to a reception at the hegumeneion and in the Monastery’s garden.

The feast was also celebrated at the Russian Monastery of St John the Baptist, led by Metropolitan Isychios of Kapitolias, who has as concelebrant Archimandrite Ieronymos. Nuns of the Monastery sang for a congregation of mostly Russian-speaking faithful and pious pilgrims.

After the divine Liturgy, the Head of the Russian Spiritual Mission (MISSIA) in Jerusalem, the Very Reverend Archimandrite Alexandros, and Abbess Georgia hosted the Most Reverend and several others to lunch.