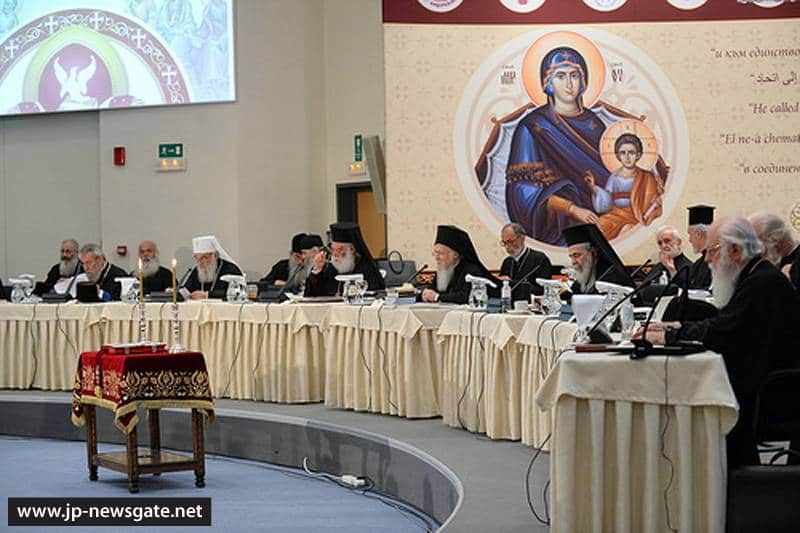 THE DELIBERATIONS OF THE GREAT SYNOD OF ORTHODOXY ON SATURDAY, 25 JUNE 2016

On Saturday, the 12th/25th of June 2016, after the divine Liturgy held in Albanian by the Church of Albania at the Monastery of Gonia, the Holy and Great Synod, during a closed meeting, dealt with the completion of the text entitled “The relations of the Orthodox Church with the rest of the Christian world”, which it had also discussed on the previous day. After long deliberations, the Synod reached an agreement and submitted the text to the Secretariat for amendment and signing.

During the same meeting, the Synod ratified the text to serve as its “Circular” along with the “Brief Message”, after the contribution of His Beatitude Anastasios, Archbishop of Albania. The brief text will be read tomorrow during the Joint Patriarchal Liturgy at St Paul’s Church of the Bishopric of Kydonia and Apokoronos. On the evening of the same day, in the presence of King Simeon of Bulgaria and the Observers of the other Christian Churches and Organisations, the closing of the proceedings took place in the presence, of course, of Ecumenical Patriarch Bartholomew, the Heads of the Autocephalous Orthodox Churches and their accompanying Hierarchs and advisors.

On the evening, a cultural event was performed by the Order of St Andrew, Archons of the Ecumenical Patriarchate in America, at the Nautical Museum of Chania.