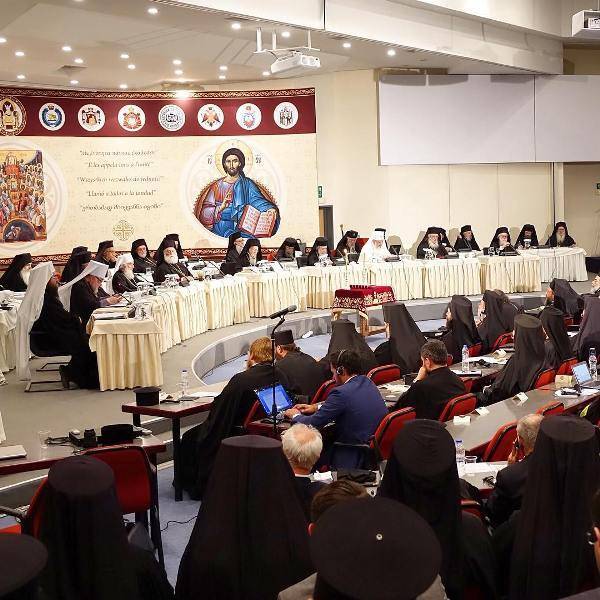 WHIT MONDAY DURING THE GREAT SYNOD OF ORTHODOXY

On Monday, the 7th/20th of June 2016, Monday of the Holy Spirit, the divine Liturgy was performed at the Church of Dormition of Theotokos, led by His Beatitude Theophilos, Patriarch of Jerusalem, with Hagiotaphite Archimandrites Christophoros and Ieronymos co-officiating. The Most Reverend Primates, Priests and laymen of the Delegation of the Patriarchate of Jerusalem and of other Churches participating in the Synod concelebrated.

After the service, the opening Session of the Holy and Great Synod of Orthodoxy began in the events hall of the Orthodox Academy of Crete, in the presence of the former king of Bulgaria, Simeon, and observers from other Christian Churches.

Ecumenical Patriarch Bartholomew first addressed the Session, followed by reply-addresses from the Heads of Churches, who pointed out the necessity of this particular Synod for communication between the Orthodox Churches and for sending out a strong Christian testament to their flocks and the world.

In His address, Patriarch Theophilos remarked on the fact that participants in the deliberations of the Holy and Great Synod overcame distances, obstacles and differences in order to seal their synodic collaboration for the support and salvation of their congregations and for attesting to peace, conciliation and unity in a world tormented by economic crisis, the immigration problem and crimes of unprecedented and harsh violence, a world in need of life, namely Christ the Lord.

“The Church of Jerusalem” went on Patriarch Theophilos, “has unwaveringly been in favour of the Synod, participating with representatives in all stages of the long preparation that included Pan-Orthodox Conventions, Inter-Orthodox Committees, Pre-Synodic Conventions and Gatherings of the Heads of Churches. So does it participate here today through Our Mediocrity and Entourage, bringing its fraternal embrace from the Holy Cave, the Horrendous Golgotha, the Most Holy Sepulchre and the Pentecost Cenacle, together with the agony of Christians in the Holy Land and the Middle East, who are guarded by the Most Holy Shrines”.

Patriarch Theophilos also referred to the absolutely necessary and important work of conservation, protection and restoration of the Aedicula of the Holy Sepulchre, in collaboration with the Franciscans and the Patriarchate of the Armenians in Jerusalem, on the basis of a project conducted by the NTUA. “Costs have been estimated to more than four million euros and are expected to be met by donations from Churches, States, Organizations and private citizens”, Patriarch Theophilos pointed out and went on to extend wishes for the fruition of the Synod’s deliberations.

At noon, the Heads of Churches and their Entourages were hosted to lunch by the Orthodox Academy of Crete, whilst in the afternoon the Synod discussed the text entitled “The Mission of the Church in the contemporary world”.