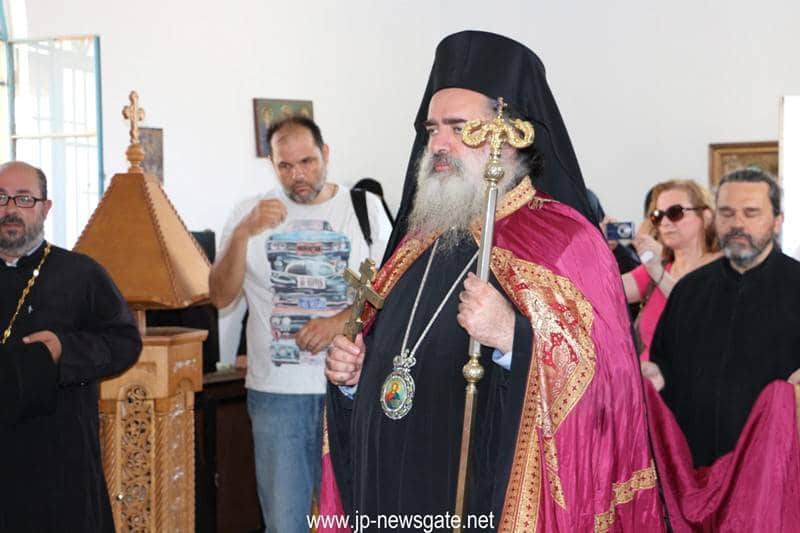 On Monday, the 7th/20th of June 2016, the feast of the Holy Spirit was observed in commemoration of the day on which the Holy Spirit descended upon the disciples in the form of tongues of fire and enlightened them so that they would preach the crucified and resurrected Jesus Christ to the crowds that responded to their calling.

The feast was celebrated on the very site where the event took place, namely the Holy Sion.

There, in the Patriarchate’s Holy Trinity Church, Vespers was held in the afternoon, followed by divine Liturgy on feast-day, led by His Eminence Theodosios, Archbishop of Sebaste, who had as concelebrants Archimandrite Makarios, priests Nikitas and Charalambos, and deacon Anastasios. Archimandrite Aristovoulos sang for a pious congregation of Orthodox Christians.

The service was followed by procession to the Tomb of David and the Cenacle where the Pentecost prayers were recited, one in the Chapel/Catacomb and the other on the Cenacle. The ceremony took place under the protection of the Israeli Police against protests by extremists in the region of David’s Tomb.

After the procession, supplication was made in front of the South entrance to the Greek Orthodox Cemetery of the Holy Sion. Then, the School Principal, Mr Nikolaos Souliotis, hosted Primates and guests to a reception at the School’s Hall of Events.