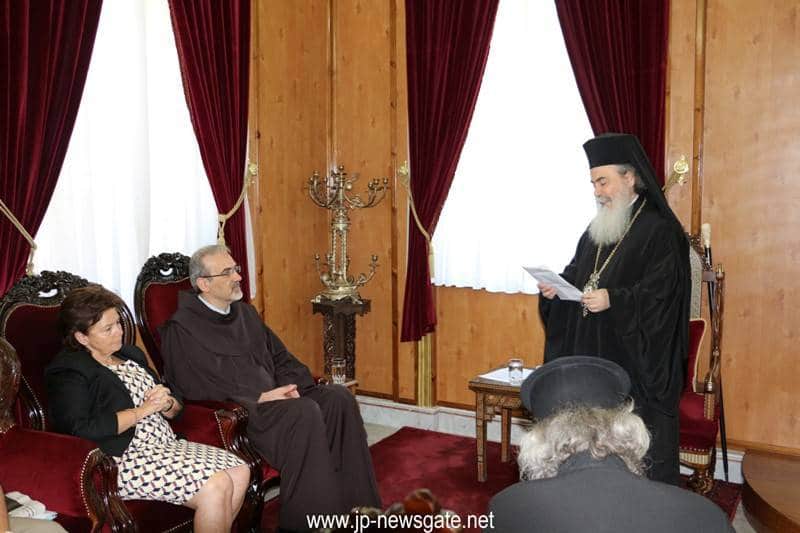 On the morning of Monday, the 17th/30th of May 2016, His Beatitude Theophilos, Patriarch of Jerusalem, welcomed the Custos of the Holy Land, Rev. Fr. Pierrebattista Pizzaballa, on the occasion of the twelfth anniversary of his diaconate and his 25-year stay in the Holy Land.

At the meeting, the Custos thanked His Beatitude on the collaboration between the Hagiotaphite Brotherhood and the Patriarchate with the Franciscan Fraternity. Patriarch Theophilos addressed f. Pierrbattista in English, see link: https://en.jerusalem-patriarchate.info/2016/05/31/24028

As a token of appreciation, His Beatitude offered the Franciscan Custos the honorary distinction of Supreme Taxiarch of the Equestrian Order of the Holy Sepulchre.

Touched, the Custos thanked Patriarch Theophilos and pledged to maintain his interest in the Holy Shrines and carry on the harmonious collaboration between the Rum Orthodox Hagiotaphite Brotherhood and the Franciscan Fraternity of the Roman Catholic Church, in alignment with the Lord’s commandment to “love one another” and for the sake of joint testament in the Holy Land and the support of its Christian residents.