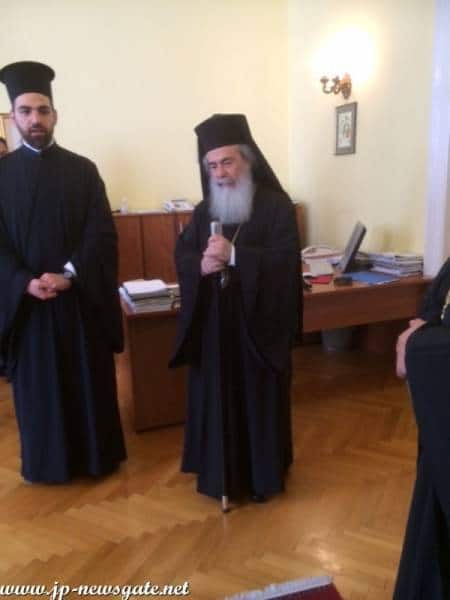 On Thursday, the 13th/26th of May 2016, His Beatitude Theophilos, Patriarch of Jerusalem, visited the Greek Embassy in Budapest. During the visit, the Patriarch blessed the building and the Embassy personnel, making a supplication for health, peace, stability and prosperity.

At noon, Ambassador Giannakakis hosted the Patriarch and His Entourage, as well as Metropolitan Arsenios of Austria-Hungary, to lunch at a city restaurant.

In the evening, the Hungarian Ministry of Foreign Affairs hosted dinner in honour of His Beatitude at a floating restaurant on the Danube.

At midnight of Thursday, Patriarch Theophilos, accompanied by Metropolitan Arsenios and a representative of the Hungarian Foreign Ministry, boarded a plane of EL-AL Israel Airlines and landed safely at Ben-Gurion Airport, in the early hours of Friday the 14th/27th of May.