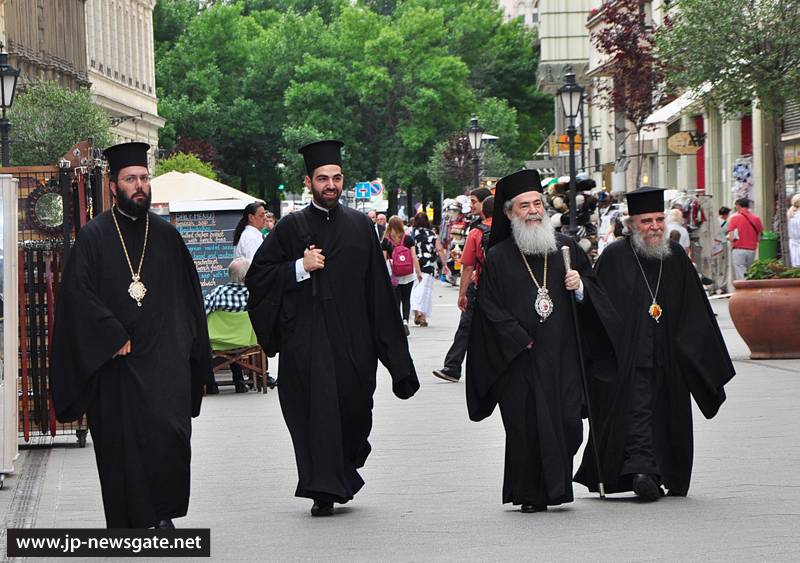 On Monday, the 10th/23rd of May 2016, His Beatitude Theophilos, Patriarch of Jerusalem, launched His official visit to Hungary, upon invitation from the country’s government.

The Patriarch is accompanied by the Elder Secretary-General, Archbishop Aristarchos of Constantina, and Archdeacon Evlogios.

His Beatitude arrived to Budapest at 9:15 am of the aforementioned day, flying with El-Al Israel Airlines.

At the airport He was warmly welcomed by the Most Reverend Arsenios, Metropolitan of Austria-Hungary of the Ecumenical Patriarchate, being the top Advisor of Hungary’s Cabinet Chief, Mr Zoltan Csallokozi; the Hungarian Ambassador to Ramallah, Mr Geza Mihailyi; the Greek Ambassador to Hungary, Mr Demetrios Yiannakakis; Consul Mr Loukas Tsokos, and other officials of the Hungarian Government, i.e. Mr Miklos Soltes, State Secretary for Civil and Church Affairs. At the airport, His Beatitude spoke of the importance of the Holy Shrines as a protective roof for Christians in the Holy Land and for Jerusalem’s religious and social status quo.

From the airport, the Patriarch was driven to Novotel Hotel.

After lunch, He visited Protopresbyter Josef Kaloti of the Bishopric of Austria-Hungary, at the Centre for the Treatment and Rehabilitation of Patients with Serious Diseases in Budapest. During the visit, an interesting discussion took place on the hospital’s humanitarian work and the possibility of collaboration with the Patriarchate’s Four Homes of Mercy, in Bethany.

Ierotheos and St Stephanos, first Christian king of Hungary. In attendance at the service were Metropolitan Arsenios, priests of the Bishopric, parishioners, Messrs. Yiannakakis, Tsokos, Mihailyi, the President of the Greek Community, Mr Georgios Koukoumtzis, and Counselor Marha Politidou.

In his address, Metropolitan Arsenios referred to the adversities facing the Greek Community in Budapest, and the Patriarch replied that the Church of the Holy Land, drenched with the blood of Christ, makes a supplication for overcoming such adversities by the example of Jesus Christ, the Resurrected from the Dead, who said “Do not fear, little flock” and taught patience. “Patience will save our souls and help us overcome difficulties”, said the Patriarch.

In the evening, the Patriarch, His Entourage and members of the Hungarian Government and the Greek Embassy were hosted to lunch at Actor Hotel, courtesy of Mr G. Koukoumtzis and Ms M. Politidou.

The dinner marked the conclusion of the first day of the Patriarch’s visit to Hungary.