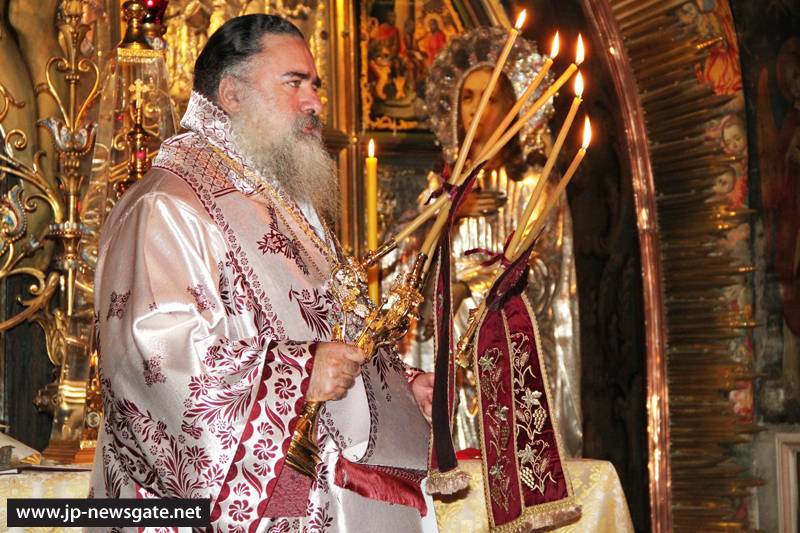 THE FEAST OF THE APPARITION OF THE CROSS (2016)

On Friday, the 7th/20th of May 2016, the Patriarchate commemorated the apparition of the Holy Cross in the sky.

According to the epistle of the Archbishop of Jerusalem, Cyril the Catechizer, to the son of Constantine the Great, emperor Constantine (PG 33, 1165), the sign of the cross was formed of bright stars, brighter than sunrays, and extended from Golgotha to the Mount of Olives in the morning hours of Pentecost Sunday in the year 351 AD, much to the surprise and amazement of the reverend inhabitants of Jerusalem, who praised God upon seeing the sign.

In memory and honour of this wondrous celestial event, divine Liturgy was held on the Golgotha, led by Archbishop Theodosios of Sebaste, who had as concelebrants Archimandrite Porphyrios and deacon Markos. Archimandrite Aristovoulos sang for a congregation of monks, nuns and pilgrims from Orthodox countries.

The apolysis was followed by procession thrice from the Holy Deposition from the Cross, having as participants Hagiotaphite Primates and Fathers, around the Aedicula of the Holy Sepulchre.

On the conclusion of the procession, the aforementioned epistle of Archbishop Cyril of Jerusalem was read in Greek by Metropolitan Timotheos of Bostra, Exarch of the Holy Sepulchre in Cyprus, and in Arabic by Archbishop Theodosios of Sebaste.

The Primatial Entourage then proceeded to the Patriarchate, where they paid their respect to Patriarch Theophilos of Jerusalem.

THE FEAST OF HOLY HIEROMARTYR HARALAMPUS AT THE PATRIARCHATE