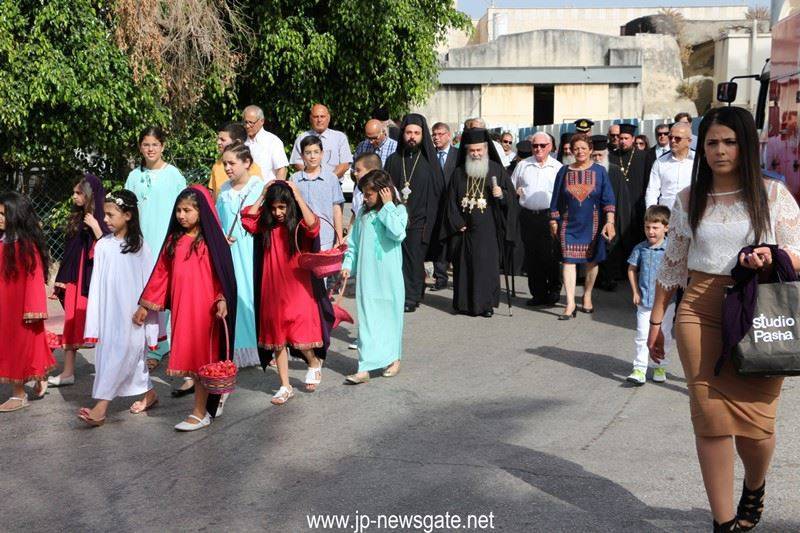 Upon His arrival from Jerusalem, the Patriarch was courteously welcomed as Boy Scouts paraded.

The feast was led by Patriarch Theophilos, having as concelebrants: Archbishops Damascene of Joppa, Aristarchos of Constantina, Methodios of Tabor; Archimandrite Ieronymos, hegumen in Fhes, as leading Archimandrite; Archimandrite Claudius, hegumen at the Monastery of the Holy Cross, visiting clerics from the Czech Republic and Slovakia, and Archdeacon Evlogios and deacon Markos. The Community Choir sang in Arabic and Greek in the presence of Messrs. Gennimatas and Boumas, representatives of the Greek Embassy to Israel, for the Orthodox people of Remli.

During Communion, His Beatitude delivered a sermon, pointing out that the feast commemorates the eighth day since the resurrection of Christ from the grave, when “the times reached their fulfilment, and brought unity to all things in Christ, both which are in heaven and which are on earth” according to Paul (Eph. 1, 10) And, according to the Apostle Peter:  The Prophet David, seeing what was to come, spoke of the resurrection of the Messiah, that he was not abandoned to the realm of the dead, nor did his body see decay. God has raised this Jesus to life, and we are all witnesses of it” (Acts 2, 31-32).

“So should we” said His Beatitude, “proclaim and confess the name of the Crucified and Resurrected Lord, with our entire soul and intellect. We should seek Christ with our hearts and mind, as instructed by the wise Paul: If you resurrect with Christ, seek for heaven above, there where Christ is seated on the right of God”.

After the Apolysis, the faithful received the antidoron and eulogias-icon from the hands of Patriarch Theophilos.

On the conclusion of the divine Liturgy, a reception followed at the hegumeneion, where Archimandrite Nephon, the Monastery’s renovator, extended thanks for the Patriarchate’s moral and material support. As a token of gratitude, he offered the Patriarch an icon of the Last Supper. Patriarch Theophilos praised the Chairwoman of the Community, Ms Frida, offering her an icon of St George.

At noon, Archimandrite Nephon and the Town Council hosted guests to lunch.