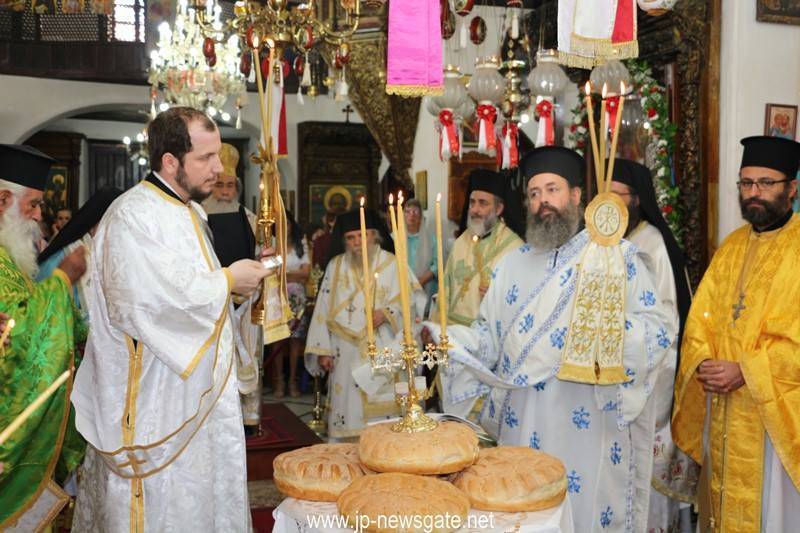 THE FEAST OF ST GEORGE THE TROPHY BEARER IN ACCRA, 2016

On Saturday, the 1st/14th of May 2016, the Patriarchate observed the memory of St George the Trophy Bearer in Accra – ancient Ptolemais – at the Patriarchate’s homonymous church.

Accra, at the northernmost edge of Israel, is one of the most ancient Bishoprics of the Patriarchate, and includes twelve towns, namely the Arabic communities of Rame, Kufr Yasif, Sahnin, Kufr Smea, Sfaamer, Abelin, Makker, Zdeide, Tarseeha, Pkea and Abu Snan.

Upon the Patriarch’s arrival in Accra, He was warmly welcomed by the town’s Boy Scouts. His Beatitude went on to lead the divine Liturgy at the ancient church of St George, having as concelebrants: Metropolitan Kyriakos of Nazareth, Archbishop Aristarchos of Constantina, Metropolitan Joachim of Zambia, Hieromonks i.e. the hegumen in Tiberias, f. Dionysios, the Presbyters of the Arabic-speaking communities near Accra, in the presence of the Greek Consul-General to Jerusalem. The Accra Choir sang under the Patriarchal Commissioner in Accra, Archimandrite Philotheos, for a crowd of Orthodox faithful.

To the pious congregation the Patriarch preached the Word of God, saying that the commemoration of St George verifies the global event of the Resurrection of Christ from the dead. “Let no one be afraid of death; for the Saviour’s death has liberated us”, proclaims St Chrysostom. And this because, according to Paul: “All of us who were baptized into Christ Jesus were baptized into his death. We were therefore buried with him through baptism into death in order that, just as Christ was raised from the dead through the glory of the Father, we too may live a new life. For if we have been united with him in a death like his, we will certainly also be united with him in a resurrection like his” (Romans 6, 3-5). “It is precisely the Resurrection of Christ that the Church of Jerusalem proclaims”, His Beatitude added. “And this salvaging message it has preserved, pure and clean of every spoliation and besmearing. The message of the apostles, we are now called upon to protect if indeed we want to resist our contemporary Diocletians and Pilatuses”, said the Patriarch.

A great crowd participated in Communion, whilst the faithful received the antidoron and eulogias from the Patriarch’s hands. After the divine Liturgy, a procession followed thrice around the church and in front of the tomb of St George of Cyprus the Neomartyr, who suffered a martyr’s death in Ptolemais in the 19th c.

The reception closed with the Patriarch’s address (to be uploaded soon).

At noon, the Patriarchal Entourage were hosted to lunch hosted by Archimandrite Philotheos.