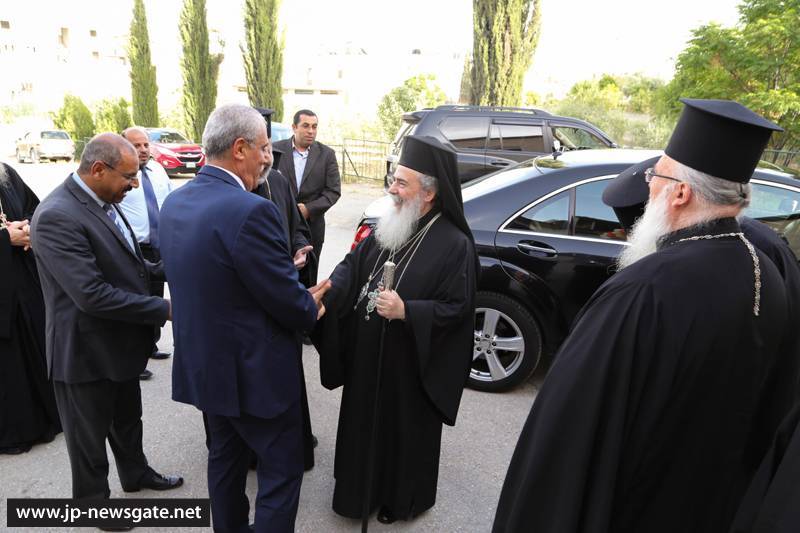 On the afternoon of Monday, the 26th of April/9th of May 2016, the Graduation Ceremony of the Patriarchate’s Lyceum in the Village of the Shepherds took place at the School’s hall of events.

The ceremony was honoured by the presence of H.B. Theophilos, Patriarch of Jerusalem. The Patriarch was accompanied by Archbishop Aristarchos of Constantina, Archdeacon Evlogios and other Hagiotaphite Fathers, i.e. the Chairman of the Patriarchate’s Schools in Israel, Archimandrite Ieronymos, the Patriarchal Commissioner in Bethlehem, Archbishop Theophylaktos of Jordan, the representative of the Greek Consulate in Jerusalem, Mr Vasileios Koinis, and the hegumen at Beit Sahour Monastery, Archimandrite Ignatios.

The ceremony began with the parade of the Graduates, hymns, and the excerpt on the Resurrection from the Gospel according to John.

The School Principal, Mr George Saante, then addressed guests, praising the Patriarchate’s contribution to the School, that began with its establishment in 1990 and continues to this day. The School, which incorporates the teaching of the Greek language, includes a Nursery, a Primary School, a High School and a Lyceum. Mr Saante made special reference to the contribution of teachers and parents in providing graduates with the necessary skills to carry on their studies or their professional careers.

Three graduates then addressed guests in Greek, English and Arabic.

Traditional Palestinian dances and songs were performed during the event.

On the conclusion of the ceremony, f. Issa Mousleh, the Patriarchate’s liaison with Arabic-speaking media, and teacher at the School, read the Patriarch’s address.