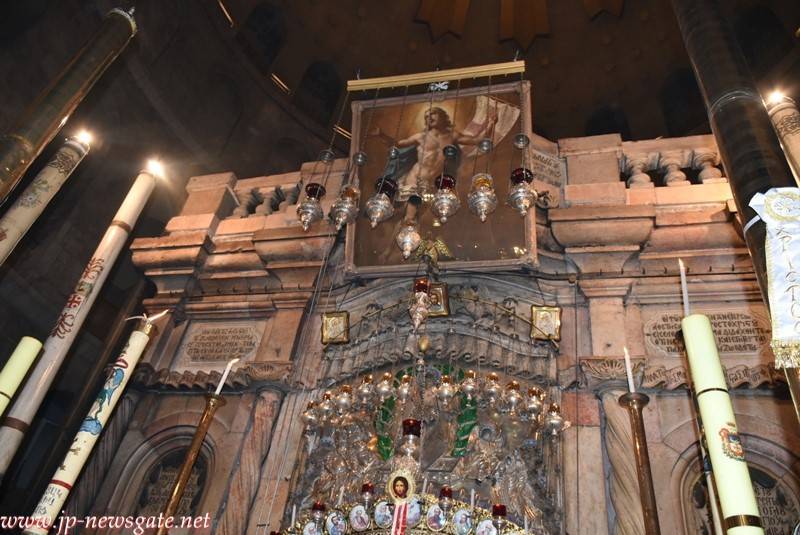 THE FEAST OF THE RESURRECTION AT THE PATRIARCHATE (2016)

On the night of Sunday, the 17th of April/1st of May 2016, the Patriarchate celebrated the Resurrection of our Lord Jesus Christ, in accordance with the veneration status, at the All-holy Church of the Resurrection.

Upon entry into the katholikon and after the Patriarch gave blessings, the Canon of Holy Saturday was sang as Priests, Primates and His Beatitude put on their sacerdotal vestments. A procession then followed towards the Holy Sepulchre.

The gospel of the Resurrection was then read, as the “Christ Has Risen” was sang ten times, thrice by the Patriarch and seven times by Primates and Hieropsalts.

After the Ninth Ode of Theotokos, the Praises-Ainoi and “Sacred Easter” began along with the Doxastic “Resurrection Day” and the “Christ Has Risen”, before the Divine Liturgy was led by Patriarch Theophilos. Co-officiating were: Metropolitan Isychios of Kapitolias, Archbishops Theophanes of Gerassa, Aristarchos of Constantina, and Metropolitan Joachim of Zambia. In attendance were the Greek Consul-General to Jerusalem, members of the Greek Consulate, Mr Vasileios Koinis, the Ambassador of Greece to Lithuania, Mr Heracles Asteriades, and Professor Antonia Moropoulou of the NTUA. A great crowd of faithful sang “Christ Has Risen” in Greek, Russian, Romanian and Arabic.

On the conclusion of Communion, the Elder Secretary-General read the Patriarch’s Easter Message, and the Patriarch read the Catechizing Speech of St John Chrysostom.

Arriving at the Church Board’s Hall, the Patriarchal Entourage were treated to eggs, cheese, cake and bread.