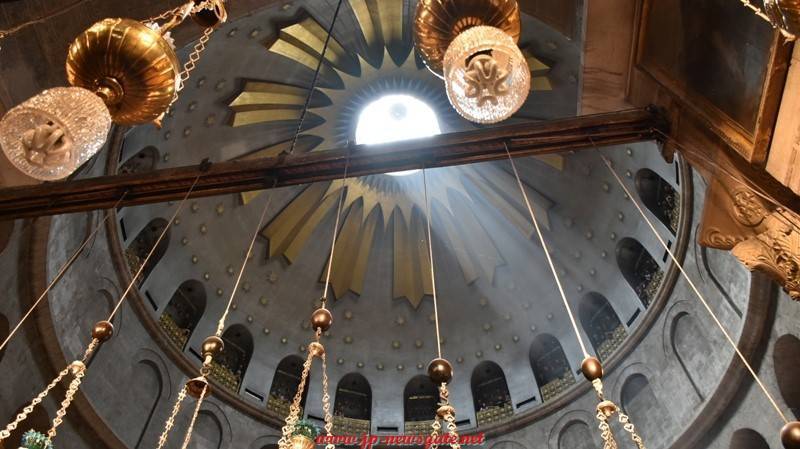 THE CEREMONY OF THE HOLY LIGHT AT THE PATRIARCHATE (2016)

The long established ceremony of the Holy Light took place at noon of Holy Saturday the 17th/30th of April 2016, in accordance with the agreed status quo of worship aiming at the unhampered participation of pilgrims.

Patriarch Theophilos exited the Patriarchate at 12:00 pm, accompanied by Hagiotaphites and the Delegations of the Greek State and the Greek Church, to enter the Holy Bema of the Katholikon.

There, the Israeli Police informed the Patriarch on measures taken for the safety of the pilgrims. Representatives of the Christian denominations – Armenians, Copts and Syrians – proceeded to receive blessing in order to receive the Holy Light.

A procession then began from the Bema, thrice around the Holy Sepulchre, and amidst a great crowd, as Archimandrite Aristovoulos and his assistants sang. Accompanying the procession were Metropolitan Theologos of Serres, the Exarch in Greece, Archimandrite Damianos, Greek Under-Secretary Mr Amanatides, and Delegations from other Orthodox Churches.

On the conclusion of the third rotation, His Beatitude removed the Primatial vestments and walked into the Holy Aedicula, accompanied by the Representative of the Armenian Patriarch until the Angel’s Stone.

Praying upon the Sepulchre, His Beatitude gave the Holy Light through the south gate to the vicar of St James Cathedral, who went on to carry it to the Holy Bema. Then the Patriarch delivered the Holy Light through lit tapers from the gate of the Aedicula, as the representatives of the Copts, Syrians and Armenians received the Light from His hands. At the same time, the crowd had received the light in joy and bliss, placing it upon their foreheads and hands.

Amidst bells tolling, the Patriarch walked to the Patriarchate, where the Delegations of the Church of Greece, of the Greek State, and the Exarch of the Holy Sepulchre in Greece, received the Holy Light by the hands of His Beatitude. There, the Patriarch addressed guests by saying that the Holy Light from the Sepulchre of the Resurrected Christ is a the greatest blessing for the Church of Jerusalem, for all Orthodox Churches and the entire world. He then extended wishes for peace and benevolence in the world, for the resolution of the problems of Syrians and other immigrants, and for the successful completion of the deliberations of the Holy and Great Synod of Orthodoxy. “Let us all celebrate the Resurrection of our Lord and Saviour, Jesus Christ, in joy, health and bliss”, said the Patriarch.