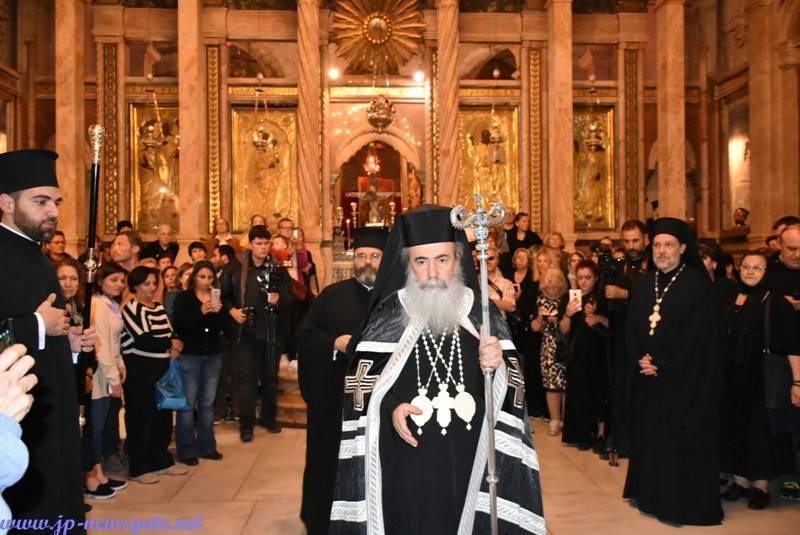 At approximately 9:00 pm of Holy Friday, the 29th of April 2016, His Beatitude Theophilos, accompanied by all Hagiotaphite Fathers, Primates and Priests visiting from other Orthodox Churches, the Greek Consul-General to Jerusalem, Mr G. Zacharoudiakis, and members of the Consulate, diplomatic representatives of other Orthodox States and a crowd of pious pilgrims, walked to the All-Holy Church of the Resurrection.

There, the Canon “On a wave of the sea…” was sang whilst the Patriarch and Primates were putting on their gold-embroidered mourning vestments.

Then, carrying small gospels, they walked in procession from the “Touch me not” shrine through the chapels around the katholikon of the Church of the Resurrection, externally, the Monastery of the Praetorium, of St Longinus the Centurion, before ascending on Golgotha, carrying the heleitarion of the Holy Epitaph.

The heleitarion they then placed on the Holy Altar of Golgotha.

From there they walked down to the shrine of the Deposition where they placed the Epitaph depicting the Body of Christ covered in flowers. A rotation followed thrice around the heleitarion, as Primates read the Gospel in turn.

From the Deposition, the procession moved to the Holy Sepulchre. After the third rotation around the Sepulchre, the Epitaph was placed on the stone as the three Stases of Holy Friday Engomia were sang.

The Word God was delivered by the Elder Secretary-General, Archbishop Aristarchos of Constantina, in Greek (to be uploaded soon).

After Doxology, the Epitaph procession terminated at the katholikon of the Church of the Resurrection, where the prophecies were read together with excerpts from the Apostles and the Gospel, before the Patriarch performed the Apolysis. The Church was then left to the care of Hagiotaphite Fathers, to be prepared in view of the Holy Light ceremony on Holy Saturday.