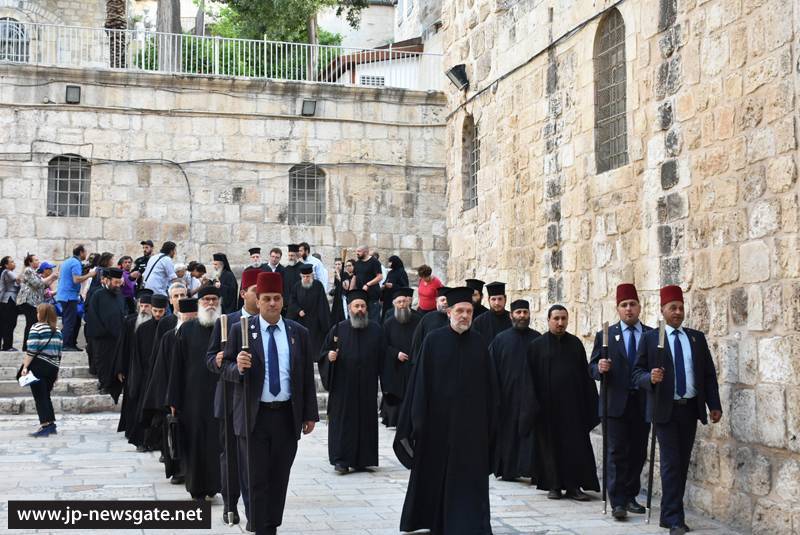 THE SERVICE OF THE BRIDEGROOM [NYMPHIOS] AT THE PATRIARCHATE

On the afternoon of Palm Sunday, the 11th/24th of April 2016, the Matins of Holy Monday, namely the Service of the Bridegroom [Nymphios] was performed at the katholikon of the Church of the Resurrection.

The service was led by H.B. Theophilos, Patriarch of Jerusalem, accompanied by the Patriarchal Commissioner, Metropolitan Isychios of Kapitolias, the Elder Secretary-General, Archbishop Aristarchos of Constantina, Metropolitan Joachim of Zambia and other Hagiotaphite Fathers.

The service was performed by the Elder Kamarasis, Archimandrite Nektarios, as Archimandrite Aristovoulos sang on the right and novice Georgios Papanikolaou and monk Antiochos sang on the left. Participating in the devout prayer were pilgrims from Greece, Russia, Ukraine and Cyprus. Towards the end of the service, His Beatitude addressed the pious congregation in Greek.

“We are called upon to remain vigilant”, said His Beatitude. “Blessed is the servant whom the Lord, coming in glory, will find in a state of vigilance, ready to encounter the Bridegroom, Christ, who cometh in the middle of the night. By contrast, unworthy of such an encounter with Christ is he who is idle. He who is mindless, callus and unwilling to work according to the orders of Christ’s love and, even worse, he who does not take into account the human within, namely his soul. What will it profit a man if he gains the whole world, yet forfeits his soul? says the Lord”.

“Who can doubt this unspoken mystery of divine Economy, the Holy History of the salvation of us humans”, the Patriarch added, “as all of us, those of us who reside here and you, visiting pilgrims, are all eye witnesses of the sites where God the Logos was incarnate and born of the Virgin Mary in Bethlehem, the land of His crucifixion, burial and life-giving Resurrection”.

The service of the Bridegroom was broadcast live on the Patriarchate’s Radio Station, see link: