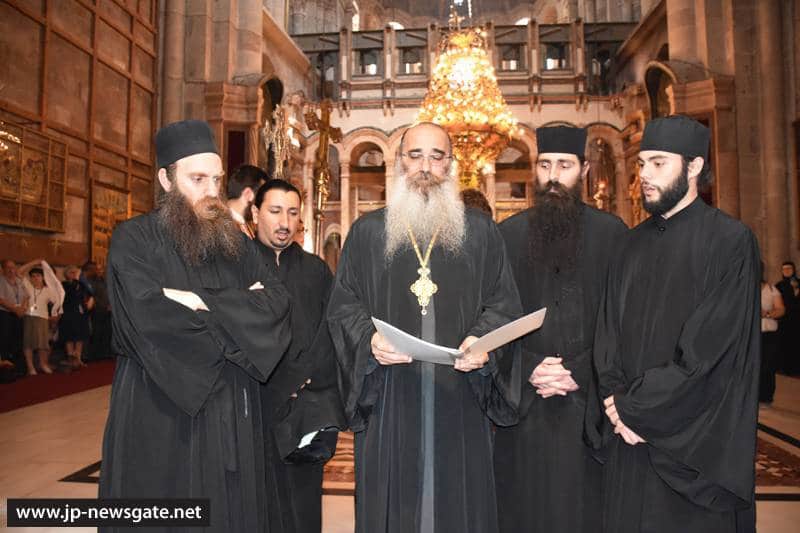 PALM SUNDAY AT THE PATRIARCHATE

On Sunday, the 11th/24th of April 2016, the Patriarchate observed the feast of Palm Sunday, commemorating the triumphant entry of Jesus to the city of Jerusalem, when the Jews spread their clothes and palm branches on the road, welcoming the Lord and shouting “Hosanna to the Son of David, blessed is he who comes in the name of the Lord”.

The feast began on Saturday afternoon with the reading of the Ninth Hour at the monastic church of Sts Constantine and Helen, and the performance of Vespers with Parrhesia at the katholikon of the Church of the Resurrection, led by Patriarch Theophilos and Hagiotaphite Hieromonks as concelebrants – the Elder Kamarasis, Archimandrite Nektarios, first amongst them – priests and hierodeacons of the Orthodox Churches, whilst the Primates prayed from within the Bema. Archimandrite Aristovoulos sang on the right, with Archimandrite Alexios and monk Joseph of Mount Athos on the left. Several pilgrims from Greece, Russia and other countries participated in piety, taking up the entire space of the katholikon.

On the conclusion of Vespers, the Patriarchal Entourage proceeded to the Central Monastery.

On Sunday, the day of the feast, the Patriarchal Entourage walked in procession to the Church of the Resurrection, amidst bells tolling.

There, after worshipping at the Holy Apokathelosis and the Holy Sepulchre, the Divine Liturgy was performed at the katholikon.

This panegyric Liturgy was led by Patriarch Theophilos, having as concelebrants: Metropolitan Isychios of Kapitolias, Archbishops Theophanes of Gerassa, Aristarchos of Constantina, Methodios of Tabor, Theodosios of Sebaste, Demetrios of Lydda, and the former Metropolitan of Zambia, Joachim; also, Metropolitan Georgi of Pereyaslav–Khmelnitsky and Vishnevsky, visiting from the Patriarchate of Moscow, and Bishop Vassily of Kotlaz, Archbishop Demetri of Udepisk, also from the Patriarchate of Moscow; Hagiotaphite Hieromonks, led by the Elder Kamarasis, Archimandrite Nektarios. The head cantor of the Church of the Resurrection, Archimandrite Aristovoulos, sang on the right, with novice Georgios Papanikolaou on the left. In attendance was the Greek Consul-General to Jerusalem, his wife, and members of the Greek Consulate. A crowd of pilgrims from Greece, Russia, Romania, Hungary and Cyprus attended the service.

The d. Liturgy was followed by procession thrice around the Holy Sepulchre and along the other shrines.

In front of the Aedicula, the evangelical pericope on Palm Sunday was read. Upon entry into the katholikon, the procession concluded.

At the Patriarchates, His Beatitude addressed guests in Greek, referring to the glorious entry of Jesus to Jerusalem as the beginning of the Passion of the Crucifixion, but also of the Resurrection of Christ and the defeat of death.

“And then the children of the Jews greeted the arrival of Christ in Jerusalem on a donkey with palms and branches, whilst we, today, carry His Cross, the weapon against the devil, but also the trophy of hope and of the Resurrection”, said the Patriarch.

The speech was read in Arabic by Archbishop Theodosios of Sebaste and in Russian by Archimandrite Eusebius.

Metropolitan Georgi of Pereyaslav-Khmelnitsky and Vishnevsky, visiting from the Patriarchate of Moscow, also addressed guests in Russian and went on to offer the Patriarch two portraits that complete the set of paintings donated in the past in the name of the Russian MISSIA, as well as other tokens of blessing from the Monastery of St Seraphim of Sarov. His Beatitude offered an icon of Theotokos and other Jerusalemite eulogias.

This glorious feast and Parrhesia of the Orthodox was broadcast live on the Patriarchate’s radio station, see link: