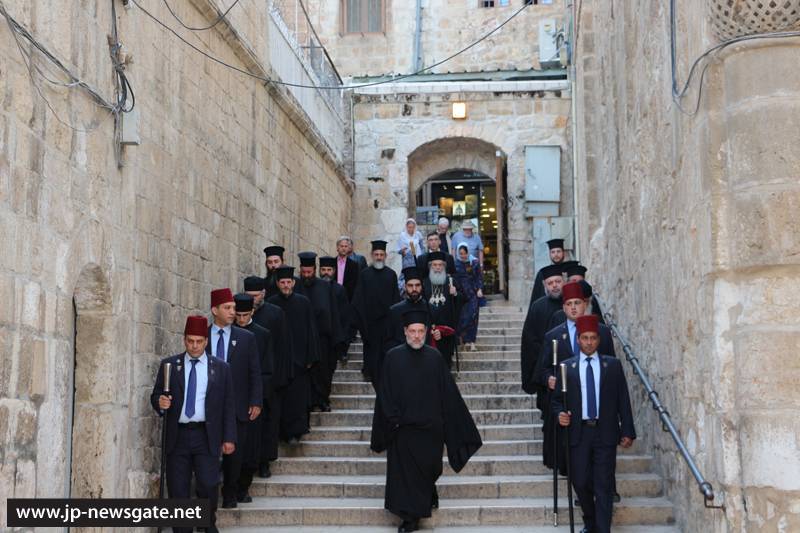 THE AKATHIST HYMN AT THE PATRIARCHATE

On the afternoon of Friday the 2nd/15th of April 2016, the Patriarchate observed the feast of the Akathist Hymn, as the nine Odes of the “I shall open my mouth” Canon was sang in the context of the Small Compline, whereas the four Stases of the Akathist Hymn were read out.

This service in honour of Theotokos and the incarnation of Jesus Christ through her and the Holy Spirit, was performed:

A’. At the All-holy Church of the Resurrection, led by H.B. Theophilos, Patriarch of Jerusalem, who read the First Stasis of the Salutations. The remaining Stases were read by the Elder Sacristan, Archbishop Isidoros of Hierapolis; the Most Reverend Joachim, former Metropolitan of Zambia, and the Elder Kamarasis, Archimandrite Nektarios.

The Canon of the Akathist was sang by His Beatitude and the leading Priest, Archimandrite Sergios, Archimandrite Porphyrios, and the Master-of-Ceremonies and Assistant Dragoman, Archimandrite Bartholomew, in the presence of the Greek Consul-General to Jerusalem, Mr G. Zacharoudiakis, his wife, and other members of the Consulate.

The service was also attended by Hagiotaphite Fathers, monks, nuns, and the Diagnostic Team of the National Technical University of Athens assigned with the restoration of the Aedicula, led by Ms Moropoulou, and pilgrims.

The service was broadcast live over the Internet from the Patriarchate’s Radio Station.

B’. In Remli – Arimathea, the Monastery of Joseph the Betrothed, led by the Most Reverend Isychios, Metropolitan of Kapitolias. The service was attended by many of the faithful, having as spiritual leader Archimandrite Nephon, a Hagiotaphite.