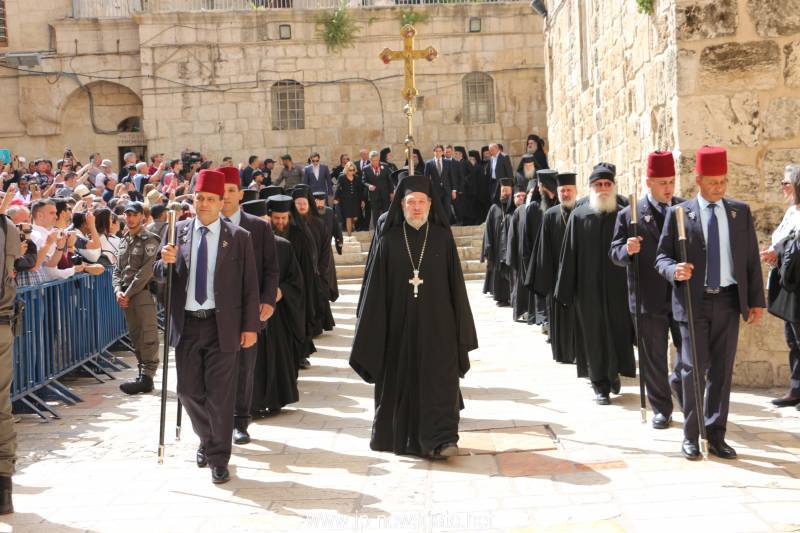 Doxology was led by H.B. Theophilos, Patriarch of Jerusalem, having as concelebrants Hagiotaphite Primates and Hieromonks, Hierodeacons and monks in the presence of the Greek Consul-General to Jerusalem, Mr Georgios Zacharoudiakis, members of the Greek parish and the Rum-Orthodox flock in Jerusalem.

Doxology included a prayer of gratitude to God for His help in the liberation of our nation from merciless slavery, and supplication for the repose of the souls of those heroically fallen during the years of the Revolution.

“A bottomless source of inspiration for the revolutionary fighters of 1821”, His Beatitude said, “were admittedly the spiritual greatness of Hellenism, especially of the Christian Orthodox Faith, as proclaimed by the great figures of 1821, Germanos of Old Patras, Kolokotronis, Makrigiannis and several others”.

“We are obliged”, the Patriarch added, “to underline this today, as contemporary perception, namely of the new order, of the divine and natural moral values, e.g. freedom and respect of human rights, is permeated by motives of anarchy and worship of created things”.

“The Greek Revolution of 1821, for the faith and the homeland, has proven that man does not live for his mortal flesh, but instead for the unsurpassed grandeur of his godlike soul. “What good will it be for someone to gain the whole world, yet forfeit their soul?” (Matthew 16, 26).

The Patriarch closed His speech by referring to the contribution of the Church of Jerusalem through the participation of it faithful children, both clerics and laymen, in the fight for freedom.

The Greek Consul-General went on to read the message of the President of the Greek Republic, Mr Pavlopoulos. Here follows an excerpt:

“The unparalleled example of our ancestors the Fighters, of 1821, must inspire and guide us for all time. Even more so during this current historical occasion for our Homeland. All Greeks, both those living in Greece and those who make part of the thriving Hellenism abroad, owe, now more than ever, to create an unbreakable front of joint responsibility and coordinated actions, so that we may successfully deal with the new challenges of the times and secure a better future for Greece and the new generations of Greeks. Now is the time when Hellenism must take action, united, according to its nature and historical destination, making the best of the immense potential and the excellent quality of human resources and of the Greeks of the Diaspora”.

The Greek President also referred to the huge financial and social problem facing Greece today in consequence of the unprecedented flow of refugees, calling upon the country’s European partners to remember that the center of Europe is not the common currency but Man himself. “We ask”, said Mr Pavlopoulos, “of the European Union to remember its principles and deal with the Refugee problem in accordance with its political and legal civilization, isolating those extreme voices within its midst that advocate exactly the opposite choices and are guided by anti-humanitarian and anti-democratic phobic syndromes”.

The event closed with a reception hosted by the Greek Consulate.