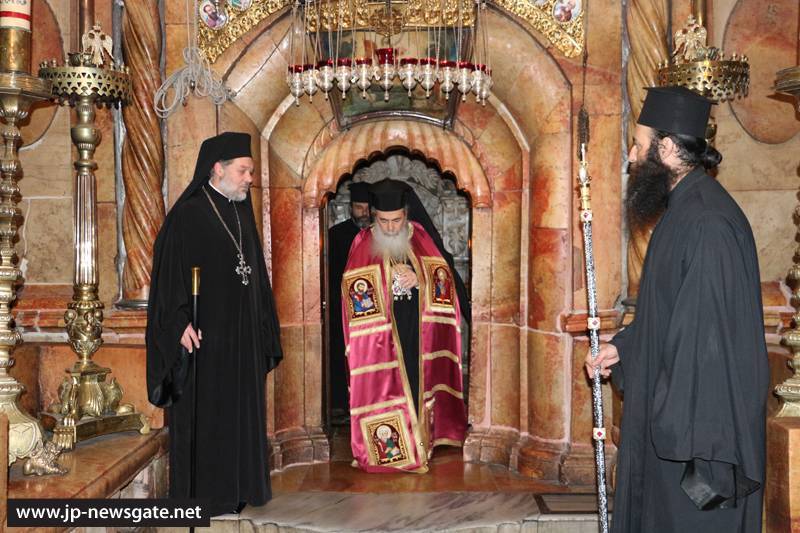 THE NAME DAY OF H.B. THEOPHILOS, PATRIARCH OF JERUSALEM

On Tuesday, the 9th/22nd of March 2016, the Name Day of H.B. Theophilos, Patriarch of Jerusalem, was celebrated in commemoration of St Theophilos, one of the Holy Martyrs who had suffered a martyr’s death in the year 320 AD, during the reign of Licinius, in Lake Sebaste, Pontus.

The feast began in the form of Parrhesia through the reading of the Ninth Hour at the Monastic Church of Sts Constantine and Helen, followed by procession to the Church of the Resurrection, censing and veneration at the Aedicula of the Holy Sepulchre.

On the morning of Tuesday, the 9th/22nd of March 2016, the Patriarchal Entourage walked to the Church of the Resurrection where the Liturgy of the Presanctified Gifts was led by Patriarch Theophilos, having as concelebrants: Metropolitans Kyriakos of Nazareth and Benedict of Philadelphia, Hagiotaphite Hieromonks and Arabic-speaking presbyters, Archdeacon Evlogios and Hierodeacons Anastasios and Markos. Archimandrite Aristovoulos sang, aided by novice Georgios Papanikolaou, in the presence of the Greek Consul-General to Jerusalem and several pilgrims.

The divine Liturgy was followed by Doxology.

The service was broadcast live over the internet on the Patriarchate’s Radio Station.

Upon return to the Patriarchates, His Beatitude was addressed by the Elder Secretary-General, Archbishop Aristarchos of Constantina, and the Greek Consul-General to Jerusalem.

In his speech, Mr Zacharoudiakis conveyed the unwavering support of the Greek Government to the Patriarchate of Jerusalem, declaring their acknowledgement, appreciation and respect for the Patriarch’s tireless efforts and multidimensional contribution, and underling the absolute confidence with which He is invested. “The unprecedented change and rapid developments of our times”, said the Consul-General, “especially in the troubled region of the Middle East, project once more the Rum-Orthodox Patriarchate of Jerusalem as a fulcrum of modesty, prudence and stability that, by means of its moral and spiritual stature, contributes to the fight against blind fanaticism and to the defence of justice, the strengthening of understanding and solidarity as well as to the achievement of progress in the efforts towards peace in the suffering Middle East”.

Mr Sami Halasa, Minister of Public Works of the Government of Jordan, and representative of the king of Jordan, also addressed the Patriarch.

Moreover, Metropolitans, Patriarchal Commissioners, representatives of Communities and of sister Orthodox Churches and of the Arabic-speaking flock paid tribute to Patriarch Theophilos.

Extending thanks to those honouring Him, the Patriarch urged everyone to emulate the virtue of the saints in the face of contemporary persecutors of the Church of Christ, who rage against the faithful members of His Church and their innocent fellow citizens. “Lets us therefore pray to the saints”, concluded the Patriarch, “so that by their mediation we provide testament of the love and forbearance of Christ our Saviour,  and we become worthy of peace and concord during these days of the holy Forty-Day Lent before reaching the glorious Resurrection of our Lord Jesus Christ”.

The festive gathering was followed by meatless monastic lunch.