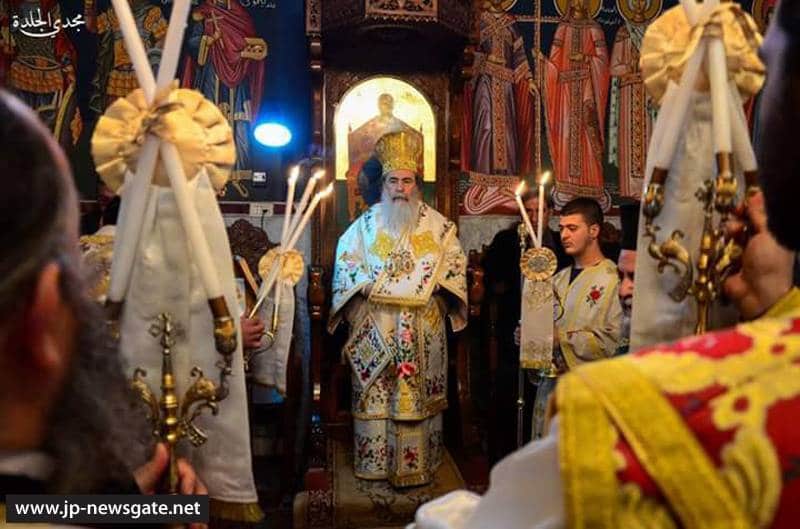 THE FEAST OF ST PORPHYRIOS IN GAZA

On Sunday the 29th of February/13th of March 2016, Cheesefare Sunday, the memory of St Porphyrios, Bishop of Gaza, was celebrated at the Monastery dedicated to his name, in Gaza.

According to his biographer, deacon Markos, St Porphyrios came from his birthplace of Salonika to the Holy Land circa 380 AD and went on to lead a monk’s life at a Monastery by the Jordan river, where he excelled in asceticism and all virtues.

When he fell ill, he went to Jerusalem and found cure by the grace of God. In 392 AD, he was ordained Presbyter and Crusader of the Church of the Resurrection. In 395 AD, he was ordained Bishop of Gaza. In Gaza, he was strongly opposed by Greek idolaters, as Gaza was still a stronghold of pagan Hellenism. The pagans’ reaction against Christians in Gaza was so strong that it initiated persecutions and a prohibition to erect Churches. In Constantinople, Bishop Porphyrios obtained an ordinance by Emperor Arkadios, on the suggestion and help of Empress Eudoxia, by virtue of which he went on to preach Christianity in Gaza, destroyed pagan temples, the Church of Marna being the foremost amongst them, founded Christian churches and, taking on a missionary work, attracted thousands of souls to Christianity.

Ever since, Gaza has remained one of the Bishoprics of the Church of Jerusalem, its centre of veneration being the Church of St Porphyrios, built on the site of his tomb.

The tomb and the church are indeed a centre of veneration for the Rum Orthodox Church of the Patriarchate, numbering approximately 3000 members, having survived in adverse conditions caused by conflicts between Palestinians and Israelis. They are guided by their spiritual shepherd, the Patriarchal Commissioner, Archbishop Alexios of Tiberias.

The divine Liturgy was performed on the aforementioned day, led by Patriarch Theophilos. Co-officiating were the Patriarchal Commissioner, Metropolitan Isychios of Kapitolias; the Patriarchal Commissioner in Gaza, Archbishop Alexios of Tiberias; the Elder Secretary-General, Archbishop Aristarchos of Constantina; the vicar at St Porphyrios church in Gaza, Archimandrite Amphilochios; Archdeacon Evlogios and deacon Markos. The congregation sang in the Byzantine style, participating piously in the divine Liturgy.

To the pious congregation, the Patriarch preached the Word of God in Greek.

Many of the faithful received Communion by the Patriarch, as well as Jerusalemite eulogias after the distribution of the antidoron.

On the conclusion of mass, a reception followed at the events hall that is adjacent to the historic church of St Porphyrios, and was recently built by Archbishop Alexios of Tiberias.

There, the Patriarch addressed the congregation in Greek.

His Beatitude went on to visit the Patriarchate’s school and the Community’s cultural centre.

At noon, Patriarchal Commissioner Alexios, who took on the significant task of protecting the poor during the last conflict between Palestinians and Israelis, hosted guests to lunch at a seaside restaurant.

After lunch, the Patriarchal Entourage crossed the borders between Gaza and Israel, and returned to Jerusalem, praising the Lord for His wonders.

THE GENERAL ABBOT OF THE FRANCISCANS VISITS THE PATRIARCHATE