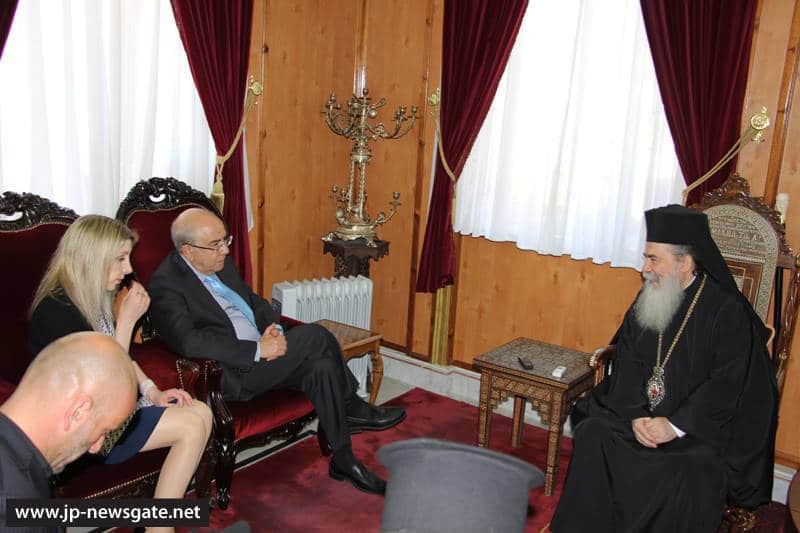 THE PRESIDENT OF THE CYPRUS HOUSE OF REPRESENTATIVES VISITS THE PATRIARCHATE

On Thursday, the 26th of February/10th of March 2016, the President of the Cyprus House of Representatives, Mr Yiannakis Omirou, visited the Patriarchate. He was accompanied by associates of his, namely the General Director of the House, Ms Vasiliki Anastasiadou, the Director of the President’s Office, Mr Antonios Koutalianos, the House’s Director of International Relations, Ms Evi Hadjiyanni, the Consul of Cyprus to Tel Aviv, Mr Michalis Fyrillas, International Relations Officer, Ms Sophie Tsouris, as well as the Ambassador of Cyprus to Israel, Ms Thessalia Shambou, and Ms Louisa Varaklas.

The distinguished guest was received by Patriarch Theophilos of Jerusalem.

Mr Omirou said he was happy and honoured to visit the Patriarchate, extending thanks to the Patriarch for the wise manner in which He handles issues pertaining to Hellenism and Orthodoxy in the context of His pastoral diaconate and for His support of the resolution of the Cyprus problem.

On his part, His Beatitude expressed joy over the centuries-long collaboration between the Patriarchate and the Republic of Cyprus, over the presence of Cypriot Hagiotaphites and over the fact that the Holy Sepulchre’s Exarchate in Cyprus was recently renovated.

After the exchange of gifts, Mr Omirou asked for the Patriarch’s blessing before going on to venerate at the church of the Resurrection.