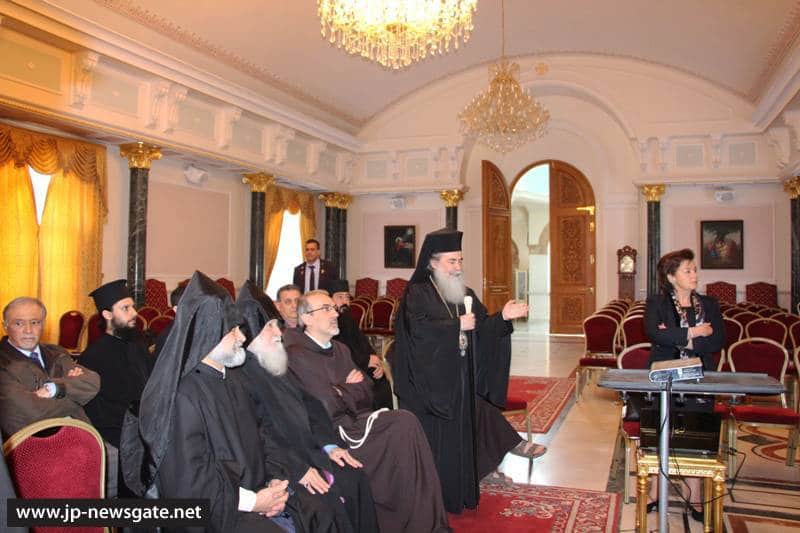 On Friday the 8th/19th of February 2016, professor Antonia Moropoulou of the National Technical University of Athens presented the study on the conservation of the Aedicula of the Holy Sepulchre that was built by the Orthodox Romans in 1810. The study was conducted under the scientific responsibility of professor Moropoulou and an interdisciplinary team made of Messrs. Korres, Georgopoulos and Spyrakos.

The study was presented to Patriarch Theophilos in the presence of Archbishop Aristarchos of Constantina, Archbishop Isidoros of Hierapolis, other Hagiotaphite Fathers, the Franciscan Custodian in the Holy Land, father Pierre Batista Pizzaballa and f. Sergios, and to the representatives of the Armenian Patriarchate in Jerusalem, Metropolitan Sevan, Hieromonk Asbet Valian and Hieromonk Samuel.

During the presentation, Ms Moropoulou explained that the problems facing the Aedicula call for technical interventions by means of compatible and sustainable materials for the enhancement and restoration of the holy Aedicula in order for it to remain an eternal testament to the Burial and Resurrection of our Lord Jesus Christ, and a point of reference for Christians across the world.

Ms Moropoulou went on to thank Patriarch Theophilos for assigning this important project to the NTUA. Thanks were also extended to the representatives of the Franciscan Order and the Armenian Patriarchate for harmoniously collaborating with the NTUA for the duration of this innovative research.

Additionally, professor Moropoulou underlined that restoration works must begin at the soonest possible, before the Orthodox Easter, in the context of collaboration between Orthodox, Franciscans and Armenians, whilst respecting the rights of each Community.

The decision-making process, Ms Moropoulou said, must be based on the study conducted by the NTUA, under the supervision of the Interdisciplinary Team that will document and, if need be, readjust the study based on real data and in agreement with the Three Major Religious Communities.

The Heads of the three Major Communities, namely the Orthodox, Franciscans and Armenians, thanked Ms Moropoulou for delivering a thorough report and agreed to sign an agreement for the promotion and execution of this historical project for the praise of Christians and the glory of the Triadic God.