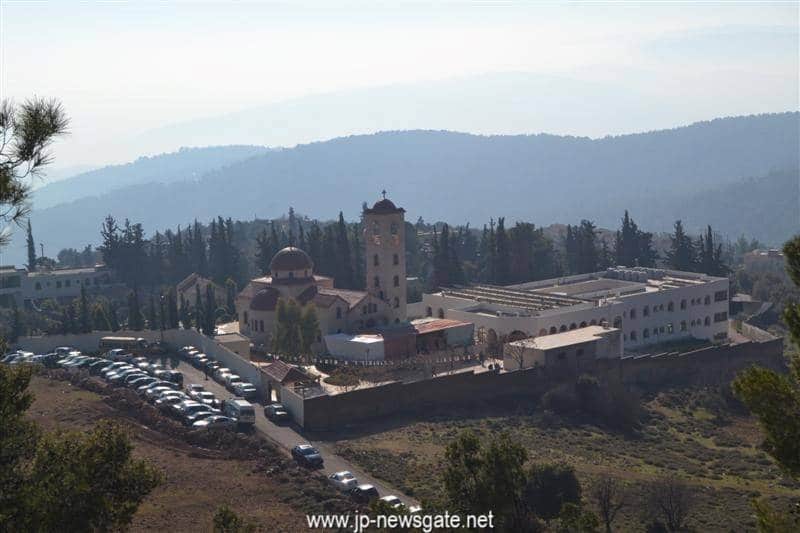 HIS BEATITUDE OFFICIATES AT THE HOLY MONASTERY OF THE LIFE-GIVING SPRING IN DIBIN, JORDAN

On the afternoon of Thursday the 29th of January/11th of February 2016, H.B. Theophilos, Patriarch of Jerusalem, accompanied by the Elder Secretary-General, Archbishop Aristarchos of Constantina, the Most Reverend Joachim, Metropolitan of Zambia, Archimandrite Ieronymos, hegumen in Fhes, fr. Issa Mousleh, the Patriarchate’s liaison with Arabic-speaking media, and Archdeacon Evlogios, left for Jordan.

Crossing the bridge of the river Jordan, His Beatitude arrived at the Patriarchate’s Bishopric in Amman, where He was warmly welcomed by the Most Reverend Benedict, Metropolitan of Philadelphia.

On the next day, the 30th of January/12th of February 2016, Patriarch Theophilos left for the Holy Monastery of the Life-giving Spring in Dibin, located at an hour’s distance from Amman.

There, He was warmly welcomed in the forecourt by Archimandrite Christophoros, priests in sacerdotal vestments, nuns and a crowd of faithful, who accompanied the Patriarch to the entrance of the church that is decorated in the Byzantine style.

The Patriarch went on to begin with the Katabasia hymns of the Hypapante, and led Matins and the divine Liturgy. Co-officiating were Archbishops Aristarchos of Constantina and Philoumen of Pella, Metropolitan Joachim of Zambia, Archimandrites Ieronymos, Christophoros and Athanasios, Arabic-speaking presbyters and the flock in Jordan, fr. Issa Mousleh, Archdeacon Evlogios and deacon Psara-Evangelos. The head cantor of the Metropolitan Church in Amman, Mr Fadi Far, sang in the Byzantine style in both Arabic and Greek, as several young people participated silently and in piety.

During Communion, the Patriarch preached the Word of God before offering the faithful the Holy Communion.

Before the apolysis, Patriarch Theophilos read the prayer for the inauguration of nun Irinea as Abbess, bestowing upon her the Abbess’ cross and an icon of Theotokos.

Similarly, His Beatitude inaugurated Archimandrite Christophoros as the Monastery’s spiritual father, offering him an icon of Christ as the True Vine.

In his reply speech, Archimandrite Christophoros said that the day was one of joy and bliss for the Monastery, as under the spiritual guidance of Abbess Irinea, the Monastery would remain a spiritual oasis in these difficult times we live in.

“This Monastery”, said Archimandrite Christophoros, “we dedicate to the Mother of Churches, my humble self and humble nuns, and we offer this icon that was painted at the Monastery of the Life-giving Spring in Dibin, for this day”. The icon depicted Hieromartyr Philoumenos, hegumen at Jacob’s Well, and St John the Chosebite, both canonized by the Mother of Churches.

Upon the crowd’s exclamation “Worthy she is…” for Abbess Irinea, the Patriarch distributed icons of St Philoumen and St John the new Chosebite.

After lunch, priests met with His Beatitude to discuss issues pertaining to their respective parishes.