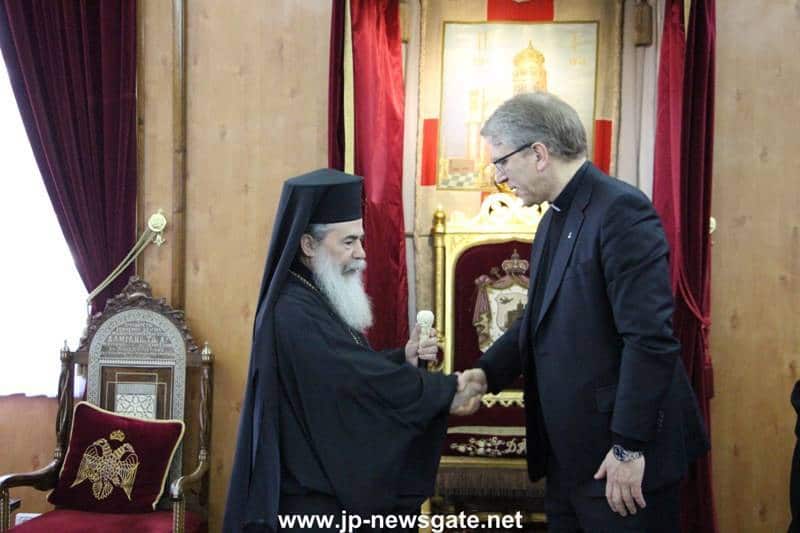 On the morning of Wednesday the 28th of January/10th of February 2016, the General Secretary of the World Council of Churches, Mr Olav Fykse Tveit, accompanied by Mr Yussef Daher and another associate of his, visited the Patriarchate.

Mr Tveit was warmly welcomed by H.B. Theophilos in the presence of Hagiotaphite Fathers.

In the context of this visit, an interesting discussion took place on the workings of the Gathering of the Heads of Orthodox Churches in Geneva between the 21st to the 29th of January 2016. Some of the events that occurred in the framework of deliberations were attended by the General Secretary and his associates. Representatives of the World Council of Churches visited the Council’s Centre in Bossé and sat at a dinner hosted in their honour.

The General Secretary informed Patriarch Theophilos on the Council’s scheduled activities in the Middle East and any area plagued by conflict, with the aim of bringing justice and peace.

Patriach Theophilos went on to suggest that the World Council of Churches encourage the organization of pilgrimages to the Holy Land for the spiritual strengthening and education of pilgrims bearing testimony to Christianity in the Holy Land, and also for the moral and financial support of Christians in the area.

At the end of the meeting, Mr Tveit thanked His Beatitude for the collaboration between the Patriarchate of Jerusalem and the World Council of Churches.