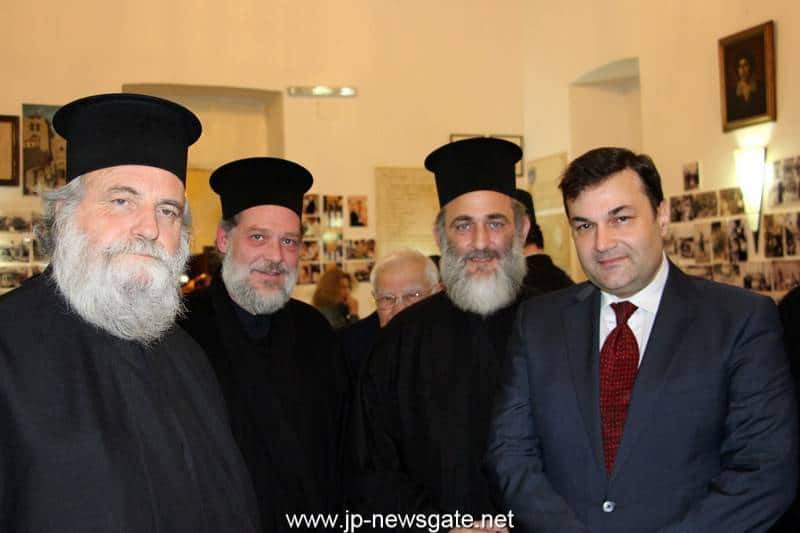 On the evening of Saturday, the 24th of January/6th of February 2016, Patriarch Theophilos, accompanied by the Patriarchal Commissioner, Metropolitan Isychios of Kapitolias, the Elder Secretary-General, Archbishop Aristarchos of Constantina, and the Most Reverend Joachim, Metropolitan of Zambia, blessed the pie-cutting ceremony at the Society of the Greek parish in West Jerusalem, near the Greek Consulate-General, a donation of the late Sacristan of the Holy Sepulchre, Archimandrite Efthymios, to the Greek Parish.

The ceremony was attended by the Greek Consul-General to Jerusalem, Georgios Zacharoudiakis, the President of the Greek Parish, Mr Anastasios Damianos, the personnel of the Greek Consulate, members of the parish of Jerusalem, e.g. Mr Ioannis Tlil, Hagiotaphite Fathers, and guests from the Israeli and Arabic society.

During the ceremony, the Patriarch underlined the significance and role of the Hellenic Society for the identity of Hellenism, as well as the Patriarchate’s support of it, and went on to wish that the year 2016 be one of health, progress, and social and humanitarian activity to the benefit of the Greek race in the glory of our Triadic God.

Mr Tlil then spoke, saying that the Hellenic Society is indeed historical, as it pre-existed World War II and because it has served as a “home” for the entire Greek Parish. Mr Tlil closed by wishing that the Society carry on its role throughout the New Year.