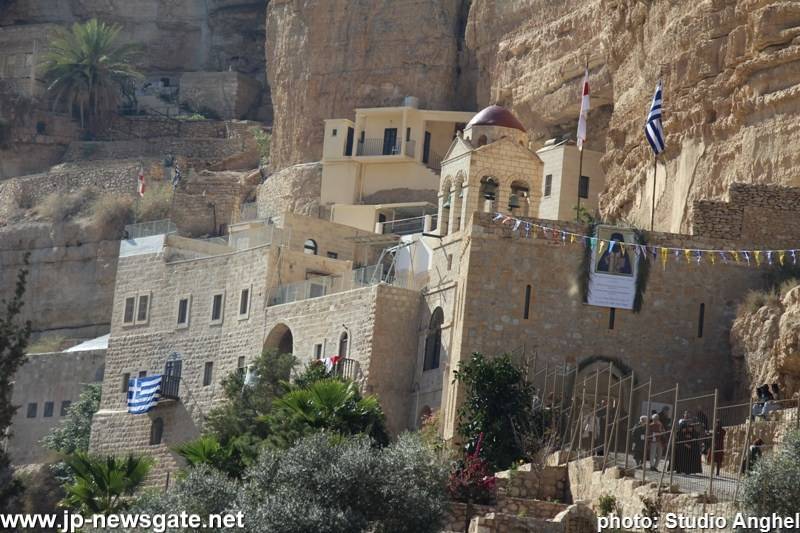 On Sunday, the 18th/31st of January 2016, St John the Chosebite was placed in the Canon of Saints  during a panegyric divine Liturgy at the Monastery of Sts John and George the Chosebites.

Hosios John, the new Chosebite, hailing from Romania, came to the Holy Land in the mid-20th c. and received the monastic schema at the Monastery of St Savva the Sanctified, and the grace of priesthood at the Patriarchate of Jerusalem. He had lived the greatest part of his life at the Monastery of Choseba, and excelled in virtue and holiness, hence why the Patriarchate of Jerusalem, by means of a Synodical Act, decided to place him in the Canon of Saints of the Church of Jerusalem and of the Church as a whole.

At the Monastery, His Beatitude was warmly welcomed by a crowd of faithful, before being addressed in Greek by the hegoumen, Archimandrite Constantine.

“The late John Jacob”, said Archimandrite Constantine, “from the saint-bearing land of Romania, had gone through the three stadia of monastic and ascetic life: namely catharsis, enlightening and theosis”.

“The Patriarchate of Jerusalem”, added the Archimandrite, “after collecting testaments and recording miracles beyond any doubt […] has decided to place the late Hieromonk John Jacob into the chorus of Saints”.

In His reply address, His Beatitude Theophilos referred to the words of the Apostle Paul –  “For we were all baptized by one Spirit so as to form one body – whether Jews or Gentiles (or Romanians) slave or free – and we were all given the one Spirit to drink” (1, Corinthians 12-13). From this one Holy Spirit, and of God and our Saviour Jesus Christ drank all the Saints of the Church, or rather, all those who became friends of Christ and communicants of the inaccessible light of His face”.

In Arabic, the Patriarch’s speech was read by His Eminence Theodosius, Archbishop of Sebaste, see link: https://en.jerusalem-patriarchate.info/ar/2016/01/31/18595

The divine Liturgy, held for the entry in force of the Synodical decision, was led by Patriarch Theophilos. Co-officiating were Metropolitans Kyriakos of Nazareth and Isychios of Kapitolias, and the Exarch of the Patriarchate of Jerusalem in Cyprus, Metropolitan Timotheos of Bostra; Metropolitan Arsenios of Austria and Hungary, Archbishop Timotheos, former representative of the Patriarchate of Romania in Jerusalem; Archbishops Aristarchos of Constantina, Theodosios of Sebaste, Demetrios of Lydda, Philoumenos of Pella; Metropolitan Joachim of former Zambia, Hagiotaphite Hieromonks, Archimandrite Hilarion, hegoumen at the Monastery of Mount Tabor; Archimandrite Ioustinos, hegoumen at the Monastery of Jacob’s Well, Archimandrite Chrysostomos, hegoumen at the Monastery of Abba Gerasimus, Archimandrite Christophoros, hegoumen at the Monastery of the Life-giving Spring; other Hagiotaphite Fathers and  many priests of the Patriarchate of Romania, led by the Very Reverend Bishop Timotheos, former representative of the Patriarchate of Romania in Jerusalem. Father George Chardavellas, visiting from the Metropolis of Ileia of the Church of Greece, sang in the presence of the Greek Consul-General to Jerusalem, Mr G. Zacharoudiakis, and Mr V. Koinis. A great congregation of monks, nuns and faithful, hailing mostly from Romania, participated in the service.

After the Prayer behind the Ambon, Patriarch Theophilos read the text of the Canonization, see link: https://en.jerusalem-patriarchate.info/gr/2016/01/31/32062

On the conclusion of the divine Liturgy and after a supplication was made with the icon of the saint, participants were hosted to monastic lunch, after which His Beatitude left for Jerusalem.