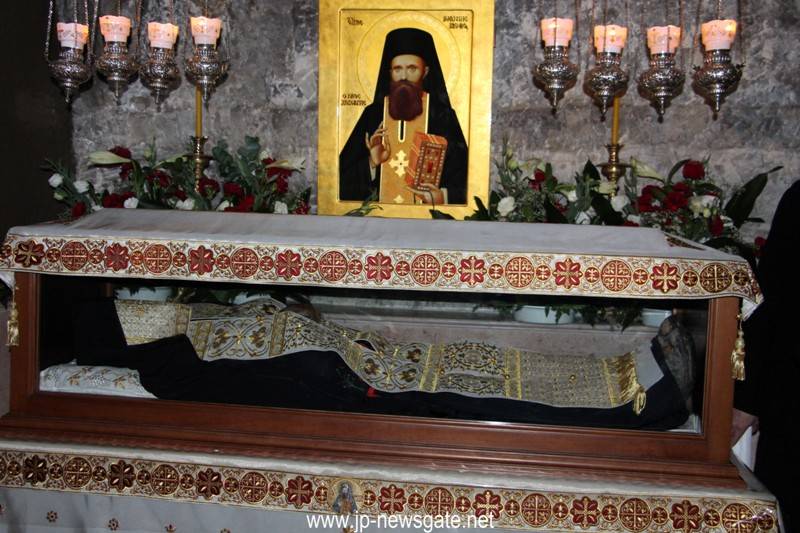 On Sunday, the 18th/31st of January 2016, the ceremony of the Canonization of Hosios John the New Chosebite by the Patriarchate of Jerusalem took place at the Monastery of Sts George and John the Chosebites.

During the divine Liturgy, His Beatitude Patriarch Theophilos of Jerusalem, read the Canonization decree, as follows:

OF HOSIOS JOHN THE NEW CHOSEBITE

The area of the Cherith brook and the Monastery of St George Chosebite within it, the place where we hold today this Joint Patriarchal Liturgy, have proven to be sites of revelation of God’s miracles for the salvation of man since the days of the Old Testament. This is where, to escape the wrath of king Ahab, Prophet Elias sought refuge, called by God: “Get thee hence, and turn thee eastward, and hide thyself by the brook Cherith, that is before Jordan. And it shall be, that thou shalt drink of the brook; and I have commanded the ravens to feed thee there”. (1 Kings 17, 2-4). In the same area, Joshua asked God to make the sun “stand still over Gibeon and the moon over the Valley of Aijalon, so the sun stood still and the moon stopped” (Joshua 10, 122-13).

In the early years of the New Testament, the holy and righteous Joachim and Anna prayed there and became Ancestors of God as by divine intervention they were liberated from the shame of childlessness and bore a child, Maria the ever virgin, through whom the Only Begotten Son and Logos of God, Jesus Christ, became incarnate by the Holy Spirit.

During the first years of the monastic angelic community, shown to us by our Lord Jesus Christ, this area was inhabited by the five hosioi fathers of the Monastery of Choseba: Promos, Elias, Yannaios, Aian and Zenon, who led a holy life to sanctification.

After them, in the 5th c. AD, St John, Bishop of Caesarea, Palestine, an opponent of the heresy of Monophysitism, expanded this first skete into a large monastic centre. Then, men, churches and cells were lost to the Persian rage in 614 AD. From the ruins and the ashes of destruction, St George the Chosebite, hailing from Cyprus, went on to restore the Monastery and turn it once more into a pole of attraction and a monastic centre for hundreds of monks.

In the mid-20th c., God blessed the Monastery par excellence through the presence of His chosen vessel, St John the New Chosebite. Leaving behind his earthly homeland of Romania, relatives and friends, he arrived in the Holy Land as a pilgrim and received the monastic schema at the Monastery of St Savva the Sanctified, where he would live a monk’s life for a decade. He then went on to lead an ascetic life at this Monastery of Choseba, hence why he has been called “the Chosebite”. He also lived in the desert of the Jordan river, emulating the example of the Baptist and subjecting himself to asceticism, fasting, vigilance and prayer. […] Those who have known hosios John attest to this day his holy life and the help he offered through prayer and spiritual guidance. Others attest that after his dormition they were cured of their illnesses by his mediation. […]

For these reasons, and for the strengthening of the faithful of the Mother of Churches and those pilgrims who have come to the Monastery of Choseba from across the world, and to the glory of our Triadic God, the Holy and Sacred Synod has decided to sanctify St John the New Chosebite and place him in the Canon of Saints of the Church of Jerusalem, his memory to be observed on the 28th of July of each year, the day of the translation of his holy relics.

DEMETRIOS Archbishop of Ledda, Secretary of the Holy and Sacred Synod

More details about this event will be available on our website in due time.