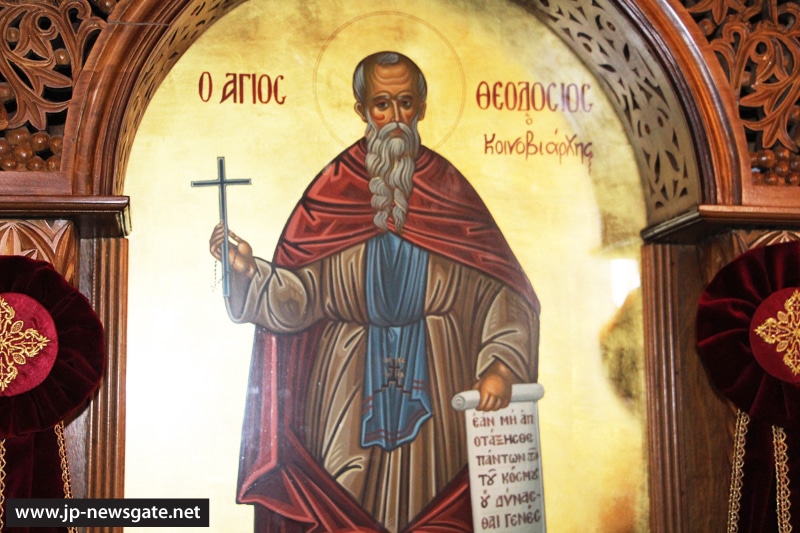 THE FEAST OF ABBA THEODOSIUS THE CENOBIARCH

On Sunday the 11th/23rd of January 2016, the Patriarchate observed the memory of St Theodosius the Cenobiarch at the monastery dedicated to his name in the desert of Judea, between the Village of the Shepherds and the Monastery of Hosios Savva.

The Monastery was founded by St Theodosius himself, having arrived in the Holy Land from his homeland of Mogarissos, Cappadocia. It was founded on the site of the Cave of the Magi as this is the region through which the Magi returned to their homeland so as not to meet Herod after he had asked for the death of the newborn Christ. Here, St Theodosius set up a Cenobium at the request of desert monks. The Cenobium received novice monks before they moved to the Hosios Savva Monastery to lead an ascetic life.

Being adjacent to the cities, the Monastery was involved in charity work. The monks maintained a house for the old, an orphanage and other benevolent institutions. Saints Sophronius and Modestus, Patriarchs of Jerusalem, hailed from this Monastery, as well as St John Moschos. St Theodosios and his compatriot, St Savva, had played a very important role against the heresy of Monophysitism and in favour of the Christological dogma of the Fourth Ecumenical Council in Chalcedon, namely Christ’s single hypostasis and two natures, one divine, the other human.

At this historical Monastery that was restored at the beginning of the 20th c. by monks Leontios and Galaktion, then in the mid-20th c. by Archbishop Bartholomew of Madava and in our days by the hegoumen, Archimandrite Ierotheos, the feast was observed with a divine Liturgy led by the Patriarchal Commissioner, Metropolitan Isychios of Kapitolias. Co-officiating were Archbishop Theophylaktos of Jordan and Metropolitan Joachim of Zambia, Archimandrite Ignatios, fathers Ieronymos and Modestos, the master of ceremonies, f. Bartholomew, f, Seraphim visiting from the Church of Greece, Hierodeacons Charalambos and Markos, and Arabic-speaking priests from the Village of the Shepherds. Monks of the Lavra of Hosios Savva sang in Greek, with members of the Orthodox Youth of the Village of the Shepherds singing in Arabic. A great crowd of faithful participated in the service for their salvation and the glory of God.

After a reception at the hegoumeneion, the Primates visited the hegoumen of the Monastery, Archimandrite Ierotheos, in his cell due to illness.

On the conclusion of the feast, the relics of the head of St Theodosius were taken to the Monastery of Martha and Maria for veneration, then returned to the Sacristy of the Holy Sepulchre where they are kept.