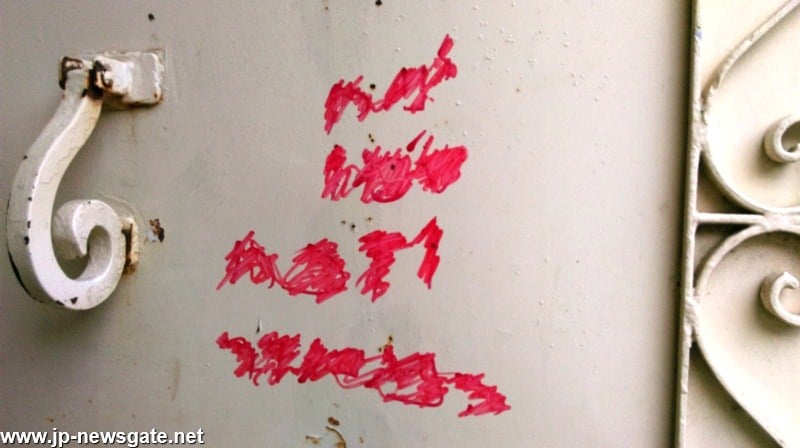 In the early hours after midnight on Sunday the 4th/17th of January 2016, the Patriarchal School of St Zion became once more subject to an attack by unknowns.

The perpetrators had attempted to break the lock on the School’s northern iron gate but failed; they went on to write slogans on the door which they then overwrote so that they wouldn’t be legible.

Early in the morning, the School’s students informed the Patriarchate of the violations.

The event, which comes after a series of similar incidents against the School, took place two days after the Patriarch’s visit there. After the pie-cutting ceremony, His Beatitude visited the open area to the south of the School, property of the Patriarchate, wherein stands the St Pentecost chapel, and inspected the rearrangement works carried out in collaboration with the Municipality of Jerusalem. He was accompanied by the Greek Consul-General to Jerusalem, Mr Georgios Zacharoudiakis, Archbishop Isidoros of Hierapolis, Metropolitan Isychios of Kapitolias, Archbishop Aristarchos of Constantina, the Architect of the Church of the Resurrection, Mr Theodoros Mitropoulos, the Principal, Mr Nikolaos Souliotis, and students from the School.

The Patriarchate irrevocably condemns this unacceptable violent action and intends to pursue legal action for the protection of the School.