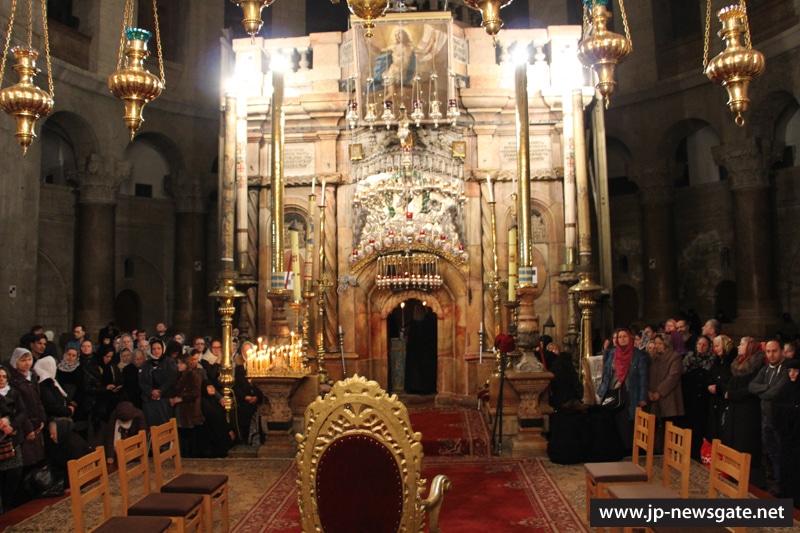 On the 1st/14th of January 2016, the Patriarchate commemorated the Circumcision of the Lord and the feast of St Basil the Great, Archbishop of Caesarea, Cappadocia, with a Parrhesia ceremony during Matins at the katholikon of the Church of the Resurrection and during a divine Liturgy at the Aedicula of the Holy Sepulchre on the eve and the morning of the aforementioned day.

The feast began with an official Procession of the Patriarchal Entourage at 12:00 a.m. to the Church of the Resurrection.

There, at the katholikon, His Beatitude gave blessings before the chanting of the Katabasias and the Megalynaria hymns.

After Doxology, the Patriarchal Entourage walked in front of the Holy Aedicula, where the divine Liturgy commenced, led by Patriarch Theophilos. Co-officiating were Metropolitan Isychios of Kapitolias and Archbishops Aristarchos of Constantina, Theodosios of Sebaste, Demetrios of Lydda, and Metropolitan Joachim of Zambia, Hagiotaphite Archimandrites, Hieromonks and Priests visiting from other Orthodox Churches, Archdeacon Evlogios, and Hierodeacons Markos and Anastasios. Archimandrite Aristovoulos sang on the right and pilgrim Mr Demetriou on the left, for a pious congregation of nuns and pilgrims from Greece, Russia, Ukraine, Romania and other countries, in the presence of the Greek Consul-General to Jerusalem, Mr Zacharoudikis and members of the Consulate.

Communion was followed by the Apolysis.

On the conclusion of the service, the relic of St Basil’s right hand was carried in procession thrice around the Holy Sepulchre and the holy shrines.

The service was broadcast live on the Patriarchate’s Radio Station over the Internet.

His Beatitude and Entourage then proceeded to the Office of the Elder Sacristan, Archbishop Isidoros of Hierapolis, where St Basil’s pie was distributed amongst guests as students from the Patriarchal School sang the Nativity Carols.

On the morning of the same day, after the divine Liturgy at the monastic church of Sts Constantine and Helen, the Patriarch cut St Basil’s pie for the Hagiotaphite Fathers at the Hall of the Church Board. At noon, the Fathers, the Greek Consul-General and guests were hosted to traditional monastic church.