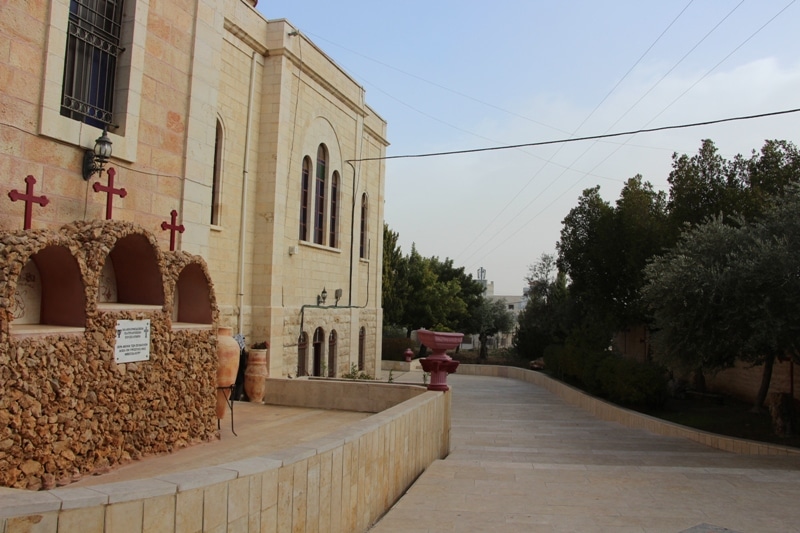 On Friday, the 26th of December 2015/8th of January 2016, the day after Christmas, the Synaxis of Theotokos was celebrated in the Village of the Shepherds, Beit-Sahour.

There is, in the town, a church dedicated to Theotokos, together with a chapel of the Holy Archangels and St Panteleimon the Great Martyr, founded by the late spiritual father of Hosios Savva Monastery, Archimandrite Seraphim the sanctified.

The church stands near the excavated ruins of a 5th c. AD Basilica, whilst a chapel dedicated to the Shepherds lies underneath it.

In honour of the Synaxis of Theotokos, Vespers and the divine Liturgy were led by the Most Reverend Joachim, Metropolitan of Zambia. Co-officiating were the hegoumen of the Monastery, Archumandrite Ignatios; Archimandrite Ananias, hegoumen at St George, Beit-Jala; the vicar of the Church of the Forefathers in Beit Sahour, Protopresbyter f. Issa Mousleh; presbyters f. Savva Her and f. Ioannis Rasmawi. F. Georgios Banura sang with the Community Choir in Arabic for a pious congregation from the Village of the Shepherds, named after the shepherds who had heard the angelic hymn “Glory to God in the highest heaven, and on earth peace to those on whom his favour rests” and rushed off to Bethlehem to behold the Incarnate Lord as a baby lying in the manger (Luke 2, 16).

Both after Vespers and after the divine Liturgy, Archimandrite Ignatios hosted the Primatial Entourage and the faithful to a reception. At noon, the Primates were hosted to festive lunch.