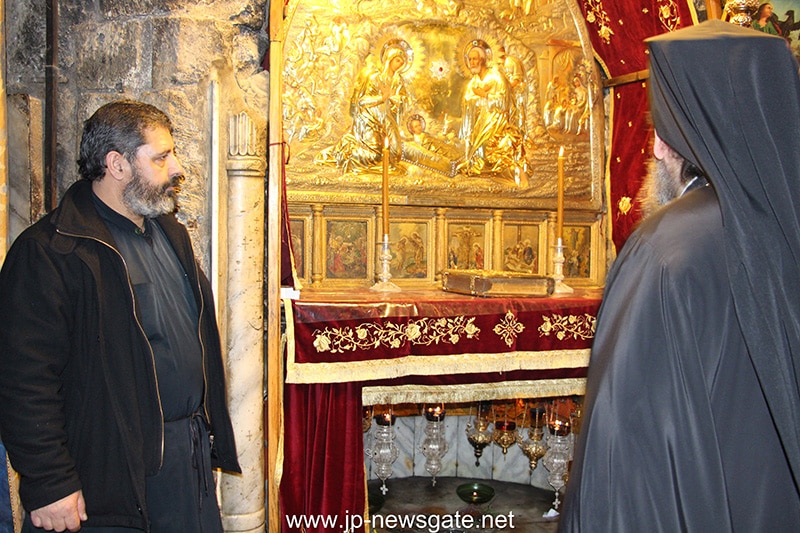 The feast of Christmas was celebrated by the Patriarchate of Jerusalem on Thursday, 25th of December 2015/7th of January 2016, in the town where our Lord Jesus Christ was born in the flesh, namely Jerusalem and the Grotto of the Nativity.

On Christmas Eve, Wednesday the 24th of December 2015/6th of January 2016, at 9:00 am, the Israeli Police paid a ceremonial visit to Patriarch Theophilos of Jerusalem. On the conclusion of the visit, His Beatitude, accompanied by police members, Hagiotaphite Primates and Hieromonks of the Hagiotaphite Brotherhood, walked to David’s Gate.

From there, the Patriarchal Entourage was driven to the Holy Monastery of the Prophet Elias, between Jerusalem and Bethlehem. At the entrance, His Beatitude was welcomed by representatives of Bethlehem, Beit Sahour and Beit Jala, as well as of the Israeli Military and Civil Administration and members of the Jerusalemite Community. After venerating at the church, they were treated to a reception hosted by the hegoumen, Archimandrite Paisios.

On the conclusion of the reception, His Beatitude, preceded by five Israelis on horseback, left for Bethlehem, specifically Rachel’s tomb, a border gate between Israel and Palestine.

From the iron gate, His Beatitude, preceded by Palestinian Police, proceeded to Bethlehem as Christians regardless of denomination flanked the street holding their children, asking for the Patriarch’s blessing. In this ambiance of joy and bliss, His Beatitude arrived at the square of Bethlehem, where He was welcomed by the Patriarchal Commissioner in Bethlehem, His Eminence Theophylaktos, Archbishop of Jordan, the Prefect, the Mayor, the Palestinian Police Chief, Hieromonks, members of the Hagiotaphite Brotherhood, Arabic-speaking clerics and a crowd of faithful.

From the square, the Patriarchal Entourage walked in procession, as the Apolytikion “Your birth, Oh Christ, has cast upon the world the light of knowledge” was chanted in Greek by the head cantor of the Church of the Resurrection, Archimandrite Aristovoulos, and in Arabic by the Church of the Nativity Choir, under Mr Laurence Samour. Through the humble gate, they entered the Basilica of the Nativity.

From there they walked across the Basilica, a privilege reserved to the Greek Orthodox, and arrived before the iconostasis, from where they descended to the Cave, venerated at the Star and the Manger and exited through the northern gate. There, in front of the iconostasis, His Beatitude gave blessings, which was followed by the service of the Great Hours and censing, Vespers and the Breaking of Bread, before the divine Liturgy of St Basil the Great, concluded at 3:30 pm.

The service was followed by monastic meal, hosted by Archbishop Theophylaktos of Jordan. On the evening of Christmas Eve, at 7:00 pm, His Beatitude hosted a reception for the President of the Palestinian Autonomy, Mr Mahmoud Abbas Abu Mazen, officials of the Palestinian Government and members of our flock.

During the reception, His Beatitude addressed the President in Arabic, offering him a Christmas present, which concluded the celebration of Christmas Eve.