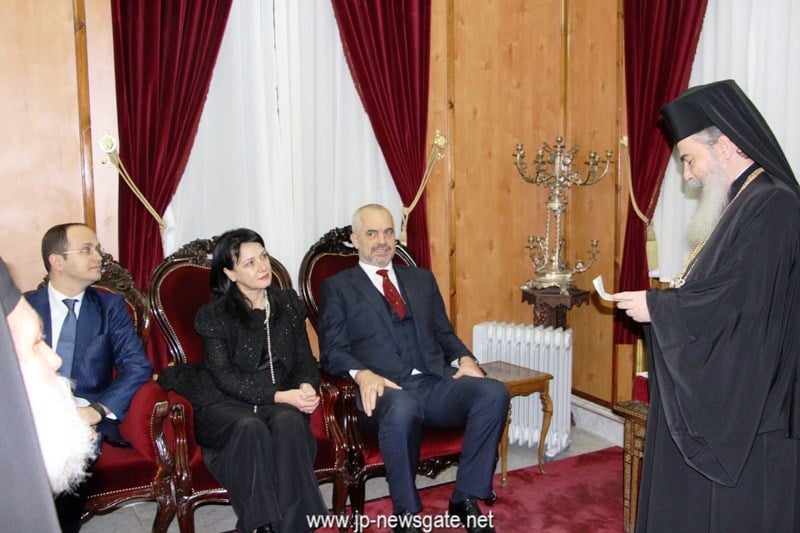 On Monday, the 8th/21st of December 2015, His Excellency the Prime Minister of Albania, Mr Edi Rama, in the context of a visit to the state of Israel, visited the Patriarchate. He was accompanied by his esteemed wife and a group of his political associates.

The Prime Minister and his retinue were welcomed at David’s Gate by the Patriarchal Commissioner, Metropolitan Isychios of Kapitolias, and the Assistant Dragoman and Master of Ceremonies, Archimandrite Bartholomew.

The Prime Minister went on to meet Patriarch Theophilos at the Patriarchate, in the presence of Hagiotaphite Fathers.

An interesting discussion took place in the context of the meeting, on the Patriarch’s peaceful visit, of two years ago, to the autocephalous Church of Albania, the revival of which has been greatly aided by His Beatitude Anastasios, Archbishop of Albania.

Reference was also made to the multi-religious and multi-communal environment of Albania and Jerusalem, ruled by mutual respect amongst the adherents to the three Monotheistic religions since the 7th c. AD, when the ever-memorable Patriarch Sophronius of Jerusalem had signed the Ahtiname, the Pact of Umar, with Caliph Omar Khattab.

On the occasion of the visit, His Beatitude addressed the Albanian Prime Minister in English, see link:  https://en.jerusalem-patriarchate.info/2015/12/21/18968

Subsequently, the Patriarch bestowed on Mr Rama the Great Cross of the Equestrian Order of the Holy Sepulchre in recognition of his contribution to interreligious peaceful coexistence and his support of the Orthodox Church of Jerusalem. Patriarch Theophilos also offered Jerusalemite eulogias to the Prime Minister’s wife and members of his retinue.

Extending thanks for this distinction, Mr Rama asked for the Patriarch’s blessing and proceeded, accompanied by Hagiotaphite Fathers, to the All-holy Church of the Resurrection, where he was welcomed by the Elder Sacristan, His Eminence Isidoros, Archbishop of Hierapolis.