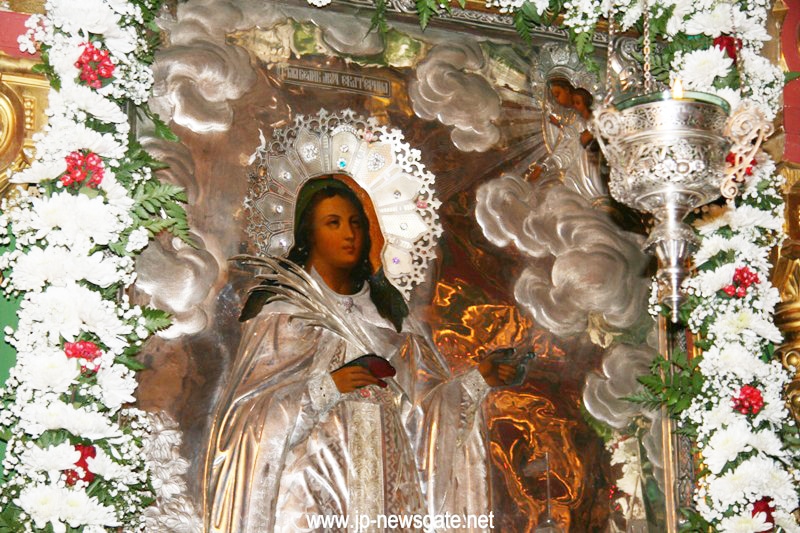 THE FEAST OF ST CATHERINE THE GLORIOUS GREAT MARTYR

Α. AT THE PATRIARCHATE.

On Tuesday, the 25th of November/8th of December 2015, the Patriarchate celebrated the feast of St Catherine the glorious great martyr hailing from Alexandria, at the Monastery dedicated to her name at a short distance from the Patriarchate in the Christian quarter.

As is well-known, St Catherine was a very educated Christian, hence why she is also called “most wise”, who brought shame on the so-called erudite and impious idolaters of Alexandria, attracting many to Christianity and suffering a martyr’s death for her confession during the reign of Maximin in 305 AD.

Vespers and the divine Liturgy were led by His Eminence Dorotheos, Archbishop of Avila, having Hagiotaphite Hieromonks and deacons as concelebrants. Archimandrite Eusebios, head cantor of Sts Constantine and Helen Church, sang in the presence of a congregation of monks, nuns, locals and pilgrims from Orthodox countries.

During the divine Liturgy, Patriarch Theophilos arrived at the church to venerate, accompanied by Hagiotaphite Fathers.

During Communion, several among the faithful partook in the sacrament of the Eucharist for strengthening, help, repentance and blessing.

His Beatitude and attendants were hosted to a reception by Archimandrite Stephanos, hegoumen of the Monastery.

On Tuesday, the 25th of November/8th of December 2015, the Patriarchate participated in the commemoration of St Catherine on Mount Sinai by means of a delegation sent by Patriarch Theophilos of Jerusalem in collaboration with Archbishop Damian of Sinai and Pharan in the context of long-established orderly relations between the Patriarchate and Mt Sinai Monastery. The delegation consisted of the Patriarchal Commissioner in Bethlehem, Archbishop Theophylaktos of Jordan, Archimandrite Paisios and deacon Markos.

The delegates left on the morning of Monday, crossed the borders between Israel and Egypt in Eilat and Taba, arrived at the Monastery, participated in the Vespers and divine Liturgy and on the morning of the following day were hosted to monastic lunch before arriving back to Jerusalem on the evening of Tuesday.