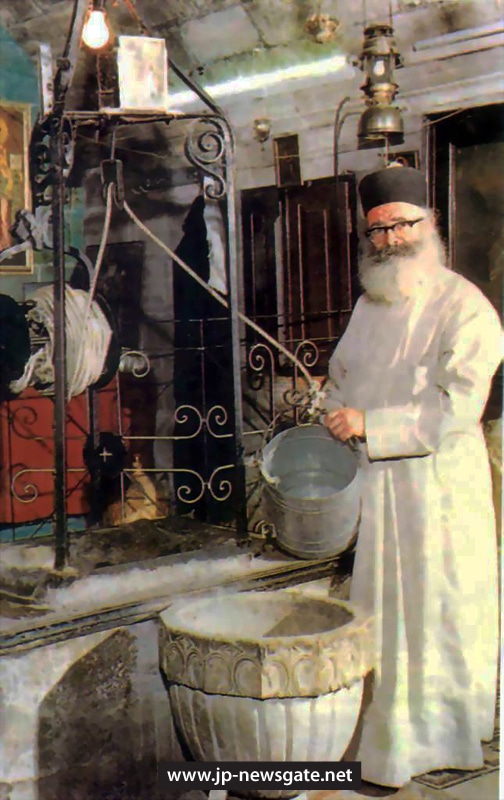 THE FEAST OF ST PHILOUMENOS THE HAGIOTAPHITE (2015)

On Sunday, the 16th/29th of November 2015, the memory of St Philoumen the Hagiotaphite and Hieromartyr was observed at Jacob’s Well.

St Philoumen, hailing from Cyprus, had served in various diaconates before being transferred to Jacob’s Well in Nablus, Samaria. It was there, in 1979, that he suffered a martyr’s death by a fanatic Israelite. In 2009, upon a decision of the Holy and Sacred Synod of the Patriarchate of Jerusalem, he was ranked amongst the saints of the Orthodox Church, his feast day set on 16th November of each year, the date of his martyrdom.

The feast and divine Liturgy at Jacob’s Well and the magnificent church of St Photini, built by Archimandrite Ioustinos, was led by Patriarch Theophilos of Jerusalem. Co-officiating were Archbishop Aristarchos of Constantina, Metropolitan Alexander of Pereyaslav-Khemlnytskyi, Metropolitan Joachim of former Zambia, visiting from the Church of Ukraine, Archimandrites Kallistos and Leontios, Hieromonk Kyriakos, Archdeacon Evlogios and Hierodeacon Markos. In attendance was the Greek Consul-General in Jerusalem, Mr Zacharoudiakis. Hieropsalts from Greece sang in Greek as hieropsalts from towns adjacent to Nablus sang in Arabic. A great crowd of Orthodox locals from Nablus and neighbouring towns, as well as pilgrims from Greece, Russia, Ukraine and Romania, observed the memory of St Philoumenos.

To the pious congregation, the Patriarch preached the Word of God in Greek.

After the apolysis, the hegoumen and renovator of the church, Archimandrite Ioustinos, hosted the Patriarchal retinue to a reception, followed by lunch also attended by the Prefect, the Chief of Police and the region’s Mayor.