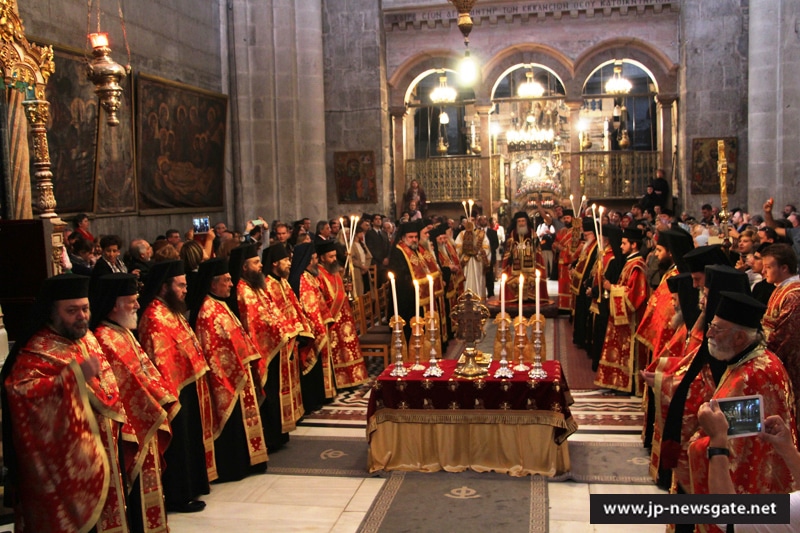 TENTH ANNIVERSARY OF THE ENTHRONEMENT OF HIS BEATITUDE THEOPHILOS, PATRIARCH OF JERUSALEM

On Sunday, the 9th/22nd of November 2015, feast-day of St Nektarios the miracle-worker, Archbishop of Pentapolis, the Patriarchate celebrated the 10th anniversary of the Enthronement of His Beatitude Theophilos, Patriarch of Jerusalem.

On the occasion of this fortunate event, Doxology was performed at the katholikon of the All-holy Church of the Resurrection, led by His Beatitude. Co-officiating were Hagiotaphite Primates and Hieromonks, having as concelebrants Hagiotaphites, members of the Arabic-speaking flock, and pilgrims, in the presence of Mr Georgios Zacharoudiakis, Greek Consul-General to Jerusalem.

On the conclusion of Doxology, concelebrants returned to the Patriarchates, where His Eminence Aristarchos, Archbishop of Constantina, addressed the Patriarch on behalf of the Holy and Sacred Synod.

In his speech, Archbishop Aristarchos spoke of the work performed by the Patriarch since His enthronement, work that is worthy of His predecessors, the late Patriarchs of Jerusalem. Special reference was made to the Patriarch’s particular sensitivity towards the safekeeping and maintenance of the Holy Shrines, that recently led to the structural enhancement of the Aedicula of the Holy Sepulchre by a group of specialized professors from Athens Polytechnic and restoration works on the roof of the Basilica of the Nativity in Bethlehem. Archbishop Aristarchos also remarked on how the Patriarchate utilizes its property for the benefit of Christians in the Holy Land, i.e. building settlements in Bethlehem and Beit-Jala, and of the harmonious relations it maintains with its sister Orthodox Churches.

The Greek Consul-General then took the floor in order to express Greece’s appreciation, recognition and respect for the religious and national work performed by the Patriarch, conveying the warmest wishes for success in the historical mission He has undertaken. “For Greece”, Mr Zacharoudiakis said, “the protection of the Patriarchate of Jerusalem and its historical rights is a priority. This holy Institution symbolizes our diachronic presence in the Holy Land as well as our traditionally friendly and constructive relations and our collaboration in the region, putting into practise the spirit of the ecumenical values of Hellenism”.

Representatives of the Patriarchates of Russia and Romania then addressed the Patriarch, as well as members of the flock.

His Beatitude spoke last, saying that He has been called upon to prove Himself worthy of His Hagiotaphite mission, “clothed” according to the Apostle Paul, “with compassion, kindness, humility, gentleness, and patience, bearing with each other… and over all these virtues put on love, which binds them all together in perfect unity”. [Col. 2, 12-13]

The Patriarch’s address was translated into Arabic by the Patriarchate’s Liaison with Arabic Mass Media, f. Issa Mousleh, and posted here: https://en.jerusalem-patriarchate.info/ar/2015/11/22/16147

After those present paid their respects to the Patriarch, Hagiotaphites and guests were hosted to festive lunch.