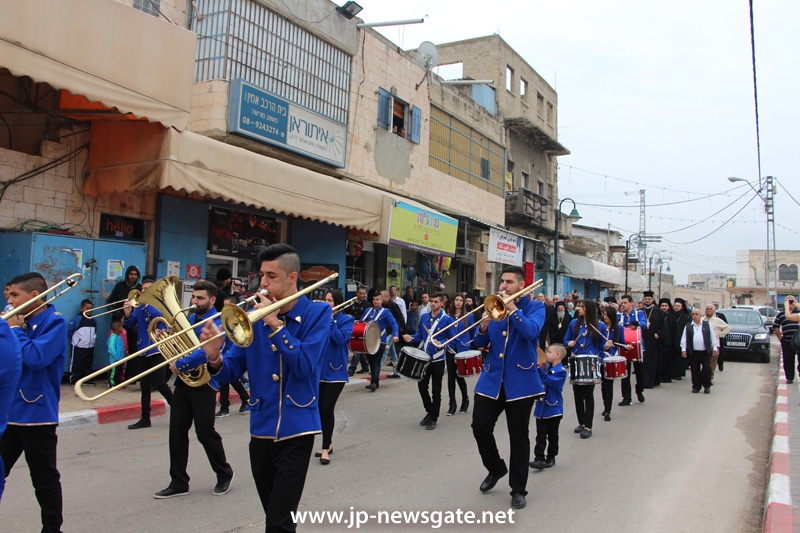 THE FEAST OF ST GEORGE THE GREAT MARTYR IN LYDDA (LOD)

On Monday, the 3rd/16th of November 2015, the Patriarchate commemorated the translation of the relics of St George the Great Martyr and Trophy Bearer, and the inauguration of the church dedicated to his name in Lydda (Lod) in the 4th c. AD.

The relics of St George had been translated from Rome, where he had suffered a martyr’s death, to Lydda, the birthplace of his mother, where it was buried in a tomb over which a magnificent church was constructed on the instructions of St Helena. The church opened on the 3rd of November, the day on which we celebrate the translation of the saint’s relics, whilst the 23rd of April commemorates his death.

St George’s Church has suffered damages and attrition throughout the history of Palestine, but has remained one of the Patriarchate’s Shrines and the Church of the Greek Orthodox Arabic-speaking Community in Lydda, numbering approximately 1300 members.

The divine Liturgy was led by Patriarch Theophilos having as concelebrants: Archbishops Damascene of Joppa and Aristarchos of Constantina; Metropolitan Joachim of former Zambia, and Bishop Isaiah visiting from the Czech Lands and Slovakia, Hagiotaphite Hieromonks of neighbouring towns; Archimandrite Sophronios, Hegoumen in Rene; Archimandrite Ieronymos, Hegoumen in Fhes, Jordan; the Head of the Russian MISSIA, Archimandrite Leontios; the Hegoumen in Remle, Archimandrite Niphon, Archdeacon Evlogios and deacon Synesios. Archimandrite Aristovoulos sang with the Community’s cantors in Greek and Arabic in the presence of Mr Alexandros Gennimatas, representative of the Hellenic Embassy to Israel; the Ambassador of the Republic of Cyprus to Israel; the Georgian Ambassador and a crowd of faithful that included Greek Orthodox Arabic-speaking locals, as well as visitors from the adjacent towns of Joppa and Remli, but also from Galilee and the occupied areas.

After the distribution of the antidoron and the apolysis, a reception was held at the Hegoumen’s quarters, followed by lunch hosted by Archimandrite Nicodemus and the Community of Lydda.

The representatives of the Embassies of Greece, Cyprus and Georgia attended lunch and were addressed in English by the Chairman of the Community. See link: https://en.jerusalem-patriarchate.info/2015/11/16/18063