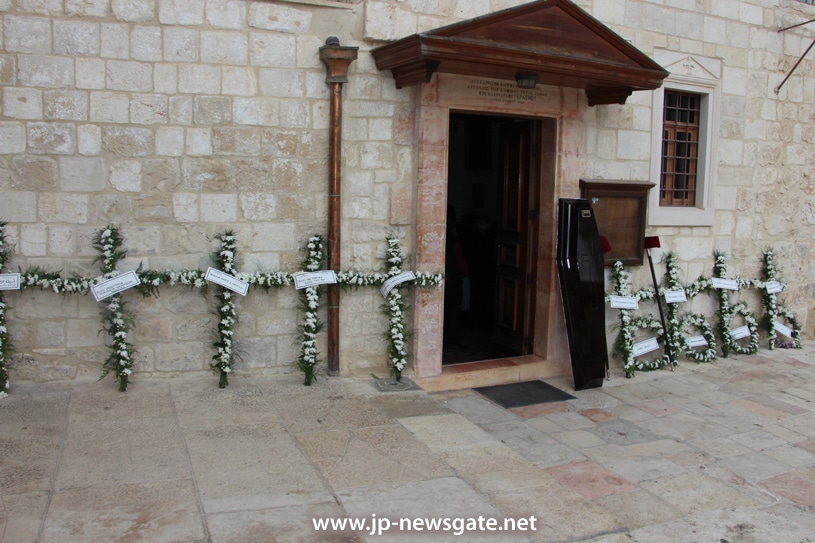 At 13:00 pm of Wednesday, the 15th/28th of October 2015, the funeral service was held for Archimandrite Keladion, Elder Kamarasis and member of the Holy and Sacred Synod.

The service was led by H.B. Theophilos, Patriarch of Jerusalem, with Hagiotaphite Primates and Hieromonks of the Central Monastery and other border monasteries co-officiating. The Greek Consul-General to Jerusalem, Mr Georgios Zacharoudiakis, attended the service along with monks and nuns of the Patriarchate, faithful from the Greek Parish and members of the Arabic-speaking flock from Jerusalem and other cities.

The eulogy was delivered by the Elder Secretary-General, His Eminence Aristarchos, Archbishop of Constantina. Archbishop Aristarchos talked of the life of the late Archimandrite, who had from a very young age chosen to serve the Lord, from his hometown in Corfu, Greece, before graduating from St Demetrius Patriarchal School and joining the Hagiotaphite Brotherhood. Archimandrite Keladion had served the Lord with dedication and self-denial, as hegoumen in Gethsemane, in Remle, in Kana, Galilee, then head of the Patriarchate’s Central Cookery, Treasurer of the “Hieron Koinon”, hegoumen at St Basil, Elder Kamarasis and member of the Holy and Sacred Synod. Throughout the whole of his life, the deceased had kept his humbleness, practicality, tranquillity and politeness, even declining a proposition to be elected to the ranks of Primate.

The body of our late brother was accompanied to his final rest at the Cemetery of the Holy Sion by Archbishop Theophanes of Gerassa, the Elder Chrysostomos and other Hagiotaphites.

May his memory be eternal.