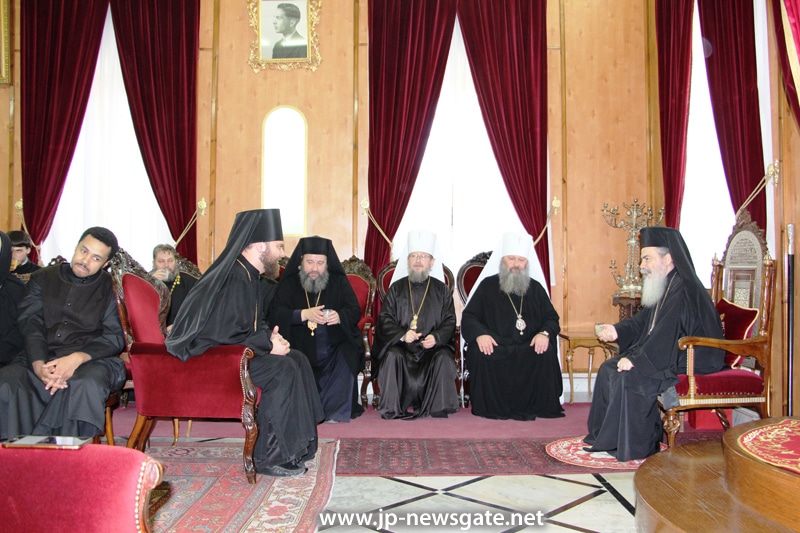 THE DECORATION OF METROPOLITAN PAUL OF VYSHGOROD AND CHERNOBYL

On Wednesday, the 1st/14th of October 2015, Metropolitan Paul of Vyshgorod and Chernobyl, accompanied by the Most Reverend Anatoly, Metropolitan of Sarny, His Eminence Vladimir, Archbishop of Volodymyr-Volynskyi, and a group of some forty pilgrims, priests, nuns and laymen, visited the Patriarchate.

They were courteously welcomed by H.B. Theophilos, Patriarch of Jerusalem, in the presence of Hagiotaphite Fathers. Addressing guests, the Patriarch said that Christianity is not a human edifice, thus its strength does not hail from this world but from heavens. A recent example is Russia, a country that for a period of 70 years had denounced Christianity and which, after the collapse of the totalitarian regime, saw the discovery of the relics of hundreds of saints who had contributed to the rebirth of the Russian Church from its ashes.

Metropolitan Paul of Chernobyl talked of the Patriarch’s visit, of two years ago, to the Kiev Lavra that is replete with the relics of holy ascetics, the blessing of whom He had received. In the same manner, he said, himself and accompanying Fathers, Primates and Priests, accept the blessing of the empty monument of the All-holy and Life-giving Sepulchre.

The Patriarch went on to bestow upon the Metropolitan of Chernobyl the medal of the Equestrian Order of the Holy Sepulchre, in recognition of his services to the Russian Church but also to the Patriarchate of Jerusalem, especially with regards to the restoration of the Basilica of the Nativity in Bethlehem. This honorary distinction, the Patriarch pointed out, makes him a relative of the Hagiotaphite Brotherhood.

On the conclusion of the meeting, tokens of love were exchanged between Patriarch Theophilos and his esteemed guests.