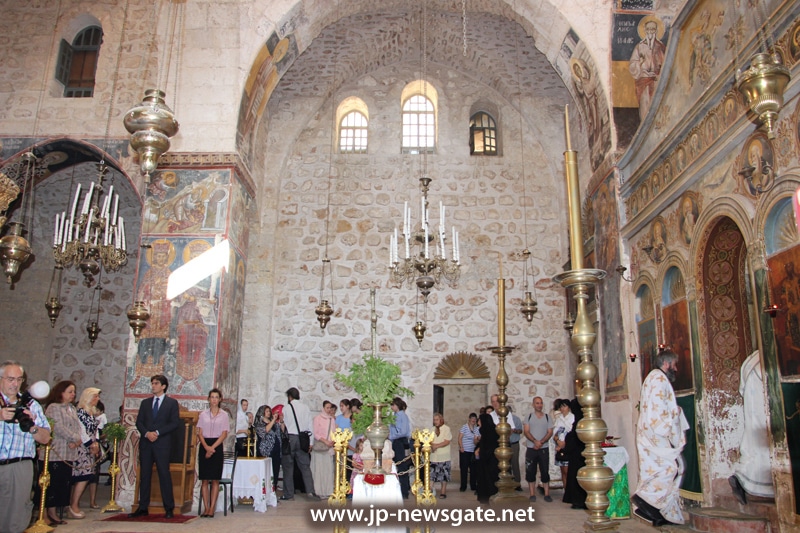 SUNDAY AFTER THE ELEVATION OF THE HOLY CROSS

According to church tradition, at this ancient Monastery Lot had planted the tree of the cross, made of pine, cedar and cypress, that was used for the construction of the Temple of Solomon, and later for the Cross on which our Lord Jesus Christ was crucified.

Between 1845 and 1909 a Patriarchal Theological School operated at the Monastery. Several laymen and clerics graduated from the School, including the ever-memorable Chrysostomos Papadopoulos, Archbishop of Athens; Meletios Metaxakis, also Archbishop of Athens and Ecumenical Patriarch; Archimandrite Kallistos Miliaras and others.

The Archbishop of Lydda led the divine Liturgy at the central church of the Monastery having as concelebrants Archimandrite Kallistos, the Hegoumen, Archimandrite Claudius and Hierodeacons Markos and Charalambos. The Greek Consul-General in Jerusalem was in attendance.

Before the apolysis, the officiating Primate performed the rite of the Elevation of the Cross as a blessing of the faithful and the Monastery.

After mass, Archimandrite Claudius hosted the Primatial Retinue and members of the flock to a reception at his quarters and later to lunch.