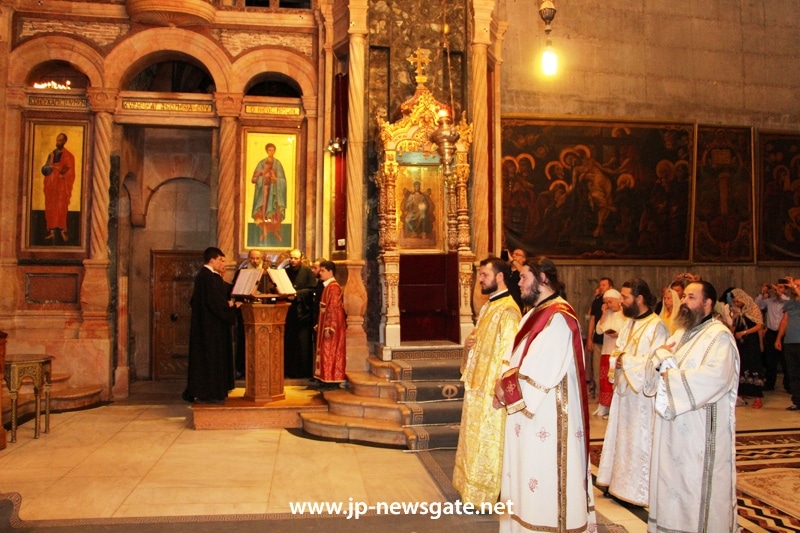 The divine Liturgy was led by the Secretary of the Holy and Sacred Synod, His Eminence, Demetrios, Archbishop of Lydda. Co-officiating were Metropolitan Barnabas of Trimithounta, visiting from the Church of Cyprus with accompanying priests, Hagiotaphite Hieromonks, priests and deacons. Archimandrite Aristovoulos sang for a congregation of pilgrims from Russia, Greece, Romania, Ukraine, Cyprus and Moldavia, on a visit to Jerusalem for the feast of the Elevation of the Cross.

On the conclusion of the Liturgy, the Primates and retinue walked to the Patriarchates where they were welcomed by Patriarch Theophilos of Jerusalem. Also attending the meeting were Metropolitan Barnabas of Trimithounta, priests, and the President of the “Friends of the Holy Land” Association of Cyprus, Mr Panayiotis Panteli, who went on to offer His Beatitude icons for the iconostasis of the Church of Pkea.

The service was broadcast live over the Internet by the Patriarchate’s Radio Station.

H.H.B. THE PATRIARCH OF JERUSALEM CELEBRATES THE DIVINE LITURGY AT THE H. MONASTERY OF SAINT ONUPHRIUS